‘Days of Our Lives’ Spoilers: Should Love Bloom for Chad and Ciara – New Salem Couple? 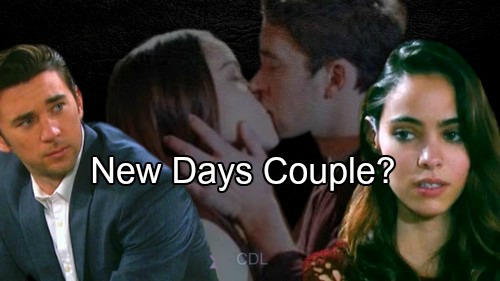 Days of Our Lives (DOOL) spoilers tease that Chad (Billy Flynn) will soon be dealing with total turmoil. Andre (Thaao Penghlis) will give Chad updates on a recent plane crash and he’ll manage to provide proof that Abigail (Kate Mansi) was on board. Chad won’t buy it at first, but he’ll eventually start to accept the news.

Later, Chad will have a terrifying nightmare. Days of Our Lives spoilers reveal that Chad will dream about Abigail’s death and panic will set in. He’ll go through every stage of grief, which means we’ll see a variety of outbursts.

After a brief custody battle, Chad will end up letting Jennifer (Melissa Reeves) take Thomas for a while. He’ll feel like it’s too difficult to be around his son right now. This is the child Chad and Abigail made together. Abby loved Thomas more than anything and Chad will hate the thought of raising him alone.

Instead of working through his issues, Days spoilers say Chad will just ignore them and wallow in his grief. That could lead to some bad decisions over the next few weeks. Of course, we have to wonder what’s going to happen with Ciara (Vivian Jovanni).

Chad has been growing closer to Thomas’ nanny lately and that trend is going to continue.

If Jennifer is keeping Thomas, where does that leave Ciara? Chad told Ciara that he didn’t know what he’d do without her at the mansion. Ciara is staying in one of the DiMera cottages, but she certainly spends a lot of time in the main house.

Will Chad allow Ciara to stay when her babysitting services are no longer required? Chad admitted that Ciara was the only person he felt like he could trust. After Chad loses all hope, he’s going to feel helpless and alone. Chad may cling to the nearest warm body, which happens to be Ciara.

Since something is obviously brewing, we want to know what you think about the relationship between Ciara and Chad. Are you OK with this friendship becoming a romance? Does it make sense or is it just ridiculous? DOOL fans will definitely have some strong opinions on this pairing!

We can’t ignore the fact that Ciara was recently raped and is still in her teens. It was a decent idea to have Chad seek comfort from someone, but Ciara probably wasn’t the best choice. If Gabi (Camila Banus) wasn’t dating JJ (Casey Moss), she might’ve been a good match for Chad at the moment.

We could’ve had a legitimate love triangle once Abigail returned in the fall.

Nevertheless, Days of Our Lives picked another path and Chad will be leaning on Ciara instead. They’ll likely share some kisses soon, but will it go further? Will they just make out or is making love in their future?

Again, this is unbelievably awkward thanks to the recent sexual assault and the age difference. Still, Days viewers shouldn’t lose faith in Chad just yet. He may come to his senses before things go too far. Regardless, it’s sure to be interesting when Abigail resurfaces. Chad should’ve known better than to believe anything out of Andre’s mouth!

In the meantime, you can chime in with your thoughts on Chad and Ciara as a couple. Are you on board with a romance for these two? Vote in our DOOL poll and don’t forget to check CDL often for the latest Days of Our Lives spoilers, updates and news.