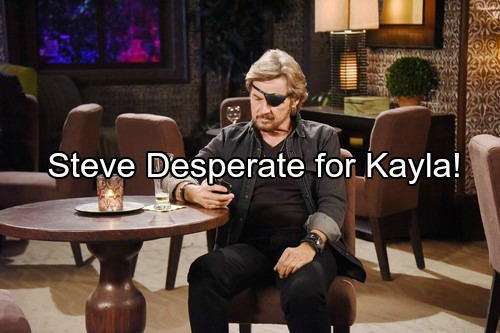 Days of Our Lives (DOOL) spoilers tease that Eduardo (A Martinez) and Steve (Stephen Nichols) will find themselves feeling down in the dumps. Adriana (Alma Delfina) has been trying to give Eduardo another chance, but she’s still worried about the danger that follows him. Eduardo wants to move forward, but it’s tough when threats keep emerging.

It seems Eduardo may never fully escape his violent past. Adriana may always have that peril in the back of her mind. Likewise, Steve can’t convince Kayla (Mary Beth Evans) that he’s done with his dangerous adventures. DOOL spoilers say Steve and Eduardo will connect over their complicated love lives.

However, these two won’t give up. Eduardo and Steve aren’t quitters and they never will be. Days of Our Lives spoilers suggest that Steve will decide to try talking to Kayla again. He keeps hoping that “Sweetness” will come around on the idea of a reunion.

Meanwhile, Fynn (Alexander Bruszt) will also have romance on his mind. Days fans know that Fynn kissed Kayla in her hotel room in California. Later, they agreed that it was best to stick to friendship. Kayla isn’t over Steve and she’s busy trying to keep Joey (James Lastovic) on track. There’s no room in her life for someone new.

Unfortunately, Fynn just can’t resist the blonde beauty. Days of Our Lives spoilers indicate that Fynn will plant a kiss on Kayla. Steve will spot them from a distance. He’ll be crushed when he feels like Kayla could be slipping away.

Kayla will repeat that she’s not interested in pursuing a relationship with Fynn, but Steve will struggle with some fears. As a result, Steve will decide it’s time to prove he can be a safe choice. DOOL spoilers state that Steve will make a career change in an effort to avoid any kind of trouble.

Since Steve will bond with Eduardo this week, maybe that means he’ll start helping out at Club TBD. Eduardo recently bought the joint and Dario (Jordi Vilasuso) could probably use some help running it. Regardless of what profession Steve chooses, it won’t be enough to win Kayla over – at least not yet.

Kayla will inform Steve that they’ll have to maintain boundaries. She won’t be up for any kind of physical relationship. Still, even something strictly platonic is better than Kayla shutting Steve out completely. The door is open just a crack. Now all Steve has to do is convince Kayla to let him in.

As for Fynn, he’s supposed to be leaving around the end of this month. That might mean Fynn will simply disappear after the kiss. He could get a nonexistent exit like Lani (Sal Stowers). On the other hand, we could see Fynn leave town to take a job elsewhere. Kayla’s rejection might play a part in Fynn’s decision to leave.

Whatever the case, Days viewers will soon have to bid Fynn farewell. We’ll give you updates if we hear more news about Fynn’s departure or Steve’s inevitable reunion with Kayla. Stay tuned and don’t forget to check CDL often for the latest Days of Our Lives spoilers, updates and news.