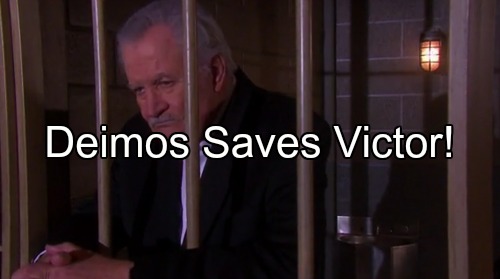 Days of Our Lives (DOOL) spoilers tease that Brady (Eric Martsolf), Theresa (Jen Lilley) and John (Drake Hogestyn) will finally have some success in their search for Tate. They’ll eventually find the British lady who’s been linked to the crime. After some intense grilling, this accomplice will decide to open up.

The woman will blame Victor (John Aniston) for orchestrating the kidnapping. She’ll insist that she was just following orders. Brady will be furious when he determines that his suspicions were correct. After plans are made for a Tate reunion, Brady and John will focus on bringing Victor down. They’ll quickly call for his arrest.

Days of Our Lives spoilers say Victor will claim Deimos (Vincent Irizarry) set him up. Sonny (Freddie Smith) will also think Deimos may have been responsible. There’s no denying that Deimos has been out to get Victor over the past few months.

Even Nicole (Arianne Zucker) will start to believe there could be some truth to the idea. Days spoilers reveal that Nicole will plead for the real story from Deimos. She’ll want to know if Deimos is truly trying to pin Tate’s kidnapping on Victor. Nicole will remind Deimos that they need to be honest with each other if they want their relationship to work.

Deimos will likely maintain that he’s innocent. He’s been doing everything he can to make amends with Victor and Maggie (Suzanne Rogers). Deimos even blackmailed a surgeon into performing Maggie’s upcoming operation. His desire for Nicole has seemingly overtaken his need for revenge.

Deimos realizes that he can’t completely win over Nicole unless he shows he’s changed. That’s why he’ll promise to help Victor if he can. Deimos will try to get to the bottom of this in hopes of clearing Victor’s name.

Of course, we know that Victor indeed had contact with a British lady. Caroline’s (Peggy McCay) vision certainly made Victor appear guilty of something. He was in the hotel room where they suspect Tate was initially taken. When Victor spoke with the woman on the phone, she told him that “it was done.”

Victor looked worried as he said absolutely nothing could go wrong. Obviously, something did. However, there’s probably more to this mystery. It’s tough to believe that this is all DOOL has in store. Victor may have been behind a plot, but someone else may have taken it too far. The scheme could’ve been intercepted.

Days of Our Lives fans can expect several twists as this storyline continues. In the meantime, Brady and Theresa will be thrilled to have their son back. They’ll still want justice, but that’s not as important as having their family whole again.

Theresa, Brady and Tate will enjoy some sweet family moments. Unfortunately, their peace will be short-lived. Days spoilers suggest that major drama is coming up for this family. A wedding day nightmare lies ahead. Xander’s (Paul Telfer) impending escape from prison will bring more chaos to Brady and Theresa’s lives.

It sounds like some action-packed episodes are on the way. We’ll give you updates as more news comes in. Stay tuned to DOOL and don’t forget to check CDL often for the latest Days of Our Lives spoilers, updates and news.