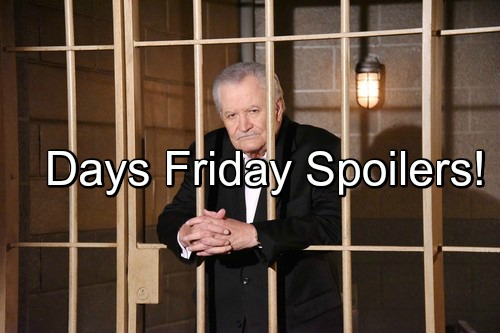 Days of Our Lives (DOOL) spoilers for Friday, August 26, tease that the cops will have some tough questions for Victor (John Aniston). They’ll confront Vic with the proof against him and demand answers about his involvement in Tate’s kidnapping. Victor will state that they have the wrong man. He’ll suggest that Deimos (Vincent Irizarry) is the one they need to be grilling.

Meanwhile, Deimos will assure Nicole (Arianne Zucker) that he’s in Victor’s corner. He’ll vow to help Victor beat the charges if he can. Nicole will be grateful that Deimos seems to be sticking with the changes he’s made. However, Brady (Eric Martsolf) will have major concerns about the whole situation.

Days of Our Lives spoilers indicate that Brady and Theresa (Jen Lilley) will share a deep conversation. They’ll be thrilled to have their son back, but Victor’s potential role in the kidnapping could cast a shadow on their joyous reunion. Brady doesn’t want to believe that his grandad would take Tate, but he can’t ignore the evidence.

Nevertheless, Brady will try to focus on his love for Theresa and their boy. They’ll soon throw themselves into wedding planning. Theresa and Brady’s nuptials will get back on track, but trouble awaits. DOOL spoilers reveal that a prison break will derail their big day.

Xander (Paul Telfer) has had ample time to plot his revenge. Theresa is in for a shock when Xander finally takes a shot at vengeance. Until then, we have lots of other drama to get to. Days fans know that Chloe (Nadia Bjorlin) is currently mulling over an important decision.

Philip (John-Paul Lavoisier) offered to pretend he’s the father of Chloe’s baby. He knows that Chloe is worried about Deimos and he wants to be there for her. Philip obviously has some lingering feelings for Belle (Martha Madison), but he’s quickly falling for Chloe again, too. Even if he wasn’t, Philip thinks this move is in the best interest of Chloe and her child.

Days of Our Lives spoilers say Chloe will decide to accept Philip’s offer and they’ll eventually cook up a story to support their claims. Of course, this plan is destined to fail. After Nicole gets updates on Chloe’s pregnancy, she’ll pry the truth out of her. For multiple reasons, Nicole will agree to keep the baby a secret from Deimos. Uh-oh. This sounds like a bad idea…

In the meantime, Nicole will face another stressful confrontation. Days spoilers tease that Kate (Lauren Koslow) will lash out at Deimos and Nicole. These characters just don’t get along and they probably never will.

Kate feels like Nicole stole her man and she’s furious about the way Deimos treated her. Deimos blames Kate for causing the river incident. Nicole is still angry about Kate framing her for murder. There’s plenty of warranted hate to go around.

Will Kate cause more problems for Nicole and Deimos? We’ll keep you posted as other news comes in. Stay tuned to DOOL and don’t forget to check CDL often for the latest Days of Our Lives spoilers, updates and news.