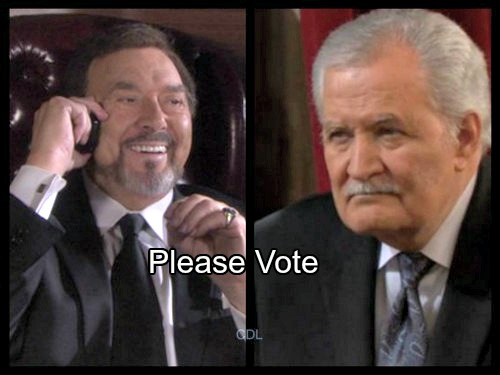 Days of Our Lives (DOOL) spoilers tease that suspicions will emerge about Victor’s (John Aniston) possible involvement in Tate’s kidnapping. Brady (Eric Martsolf) will grow increasingly worried that his granddad may have had a hand in the mayhem. The fact that Brady even has to make the accusation says a lot about Victor’s character.

At first glance, Victor doesn’t seem all that menacing. He’s an elderly gentleman who spends his days doting on his crippled wife. However, even Maggie (Suzanne Rogers) will tell you that Victor has a dark side. When it comes down to it, Victor is willing to do anything to get what he wants.

DOOL doesn’t really advertise it much, but Victor has mobster roots. He led a drug and pornography ring back in the ‘80s. Violent acts were common when deals went south. Victor’s businesses have always served as fronts for a few illegal activities. He never broke out of that pattern entirely.

Over the years on Days, we’ve watched Victor order hits on his enemies. He doesn’t hesitate to take a life if someone dares to cross him. Victor has a soft spot for his family members, but he cuts them out completely if they commit an act of betrayal. It’s ridiculously tough for the Kiriakis clan to earn back Victor’s trust when they lose it.

Victor is an underrated villain around Salem. He’s truly one of the best. Still, you can’t talk about Days of Our Lives villains without mentioning the great Stefano DiMera (Joseph Mascolo).

Like Victor, Stefano was a cutthroat crime boss. You couldn’t get away with anything on Stefano’s watch. His schemes were often devastating for the rest of Salem’s citizens. Nearly everyone in town found a reason to hate Stefano and the DiMera name in general.

Despite Stefano’s evil persona, he cherished his family. Almost all of Stefano’s plans were about protecting his loved ones or seeking revenge when the DiMeras were targeted. For Stefano, loyalty meant more than anything. If his children gave him that, he’d give them the world in return.

Of course, there were inevitably times when love got in the way. For example, EJ’s (James Scott) romance with Sami (Alison Sweeney) caused problems with his old man. Chad’s (Billy Flynn) good heart and fondness for Abigail (Kate Mansi) usually got him in trouble as well. Days viewers know that Stefano didn’t want his offspring to be weak.

Stefano would punish his kids with a dose of vengeance, but that was typically the end of it. If they surrendered and groveled at his feet, Stefano would take them back with open arms. That’s a little different from Victor and his stubbornness. Stefano definitely had a forgiving nature when it came to his own brood.

Victor and Stefano were similar in many ways, but it’s the small quirks that make fans favor one over the other. Maybe you like curmudgeonly Victor’s one-liners or Stefano’s penchant for opera and conducting. There are plenty of reasons to love these wicked DOOL characters.

Both Victor and Stefano have secured a spot in Days of Our Lives history, but which villain is your favorite? Vote in our poll and check back for updates on any future scoundrels. Bad news is always brewing in Salem. Stay tuned and don’t forget to stop by CDL often for the latest Days of Our Lives spoilers, updates and news.