Eileen Davidson RHOBH Season 7 Demotion: The Young and the Restless Star Too Expensive For The Real Housewives of Beverly Hills? 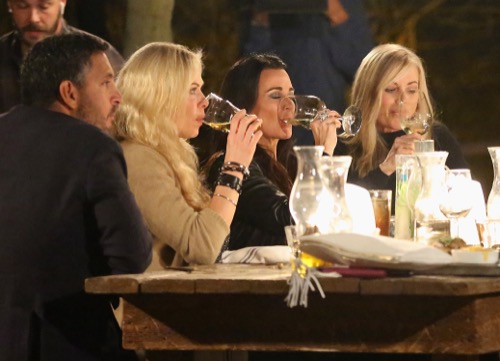 ‘The Real Housewives of Beverly Hills’ viewers might see less of ‘The Young and the Restless’ star Eileen Davison during season 7 of the reality television show. Eileen has reportedly been demoted to ‘Friend of the Housewives’ possibly because Eileen is just too expensive to remain as one of the main ladies. Or it could be lack of a storyline?

Bravo doesn’t release information about how much each Housewife is paid, but when Eileen joined the cast of ‘RHOBH’ the actress who portrays Ashley Abbot on ‘Y&R’ was given a reported $250,000. If that salary is correct it was the highest amount of money any of the ladies from any of the Housewives franchises was given for their premiere season.

No one but Bravo and Eileen, and maybe her ‘The Real Housewives of Beverly Hills,’ cohorts knows how much Eileen was paid to appear in the show’s sixth season. But let’s face it, Eileen basically had no storyline other than fighting with Lisa V. during season 6 of ‘RHOBH.’

Eileen Davidson spent most of the season 5 upset over Lisa V. trying to pry out of her whether or not Eileen had an affair with current husband Vincent Van Patten while married to Jon Lindstrom [Dr. Kevin Collins, ‘GH’]. If that’s all the storyline you’ve got, fighting with Lisa V., then you’re not going to be a ‘RHOBH’ much longer. Ask Brandi Glanville and Taylor Armstrong.

Tamara Tattles exclusively reported more ‘The Real Housewives of Beverly Hills’ season 7 casting news. Of course Kyle Richards and Lisa Vanderpump are back. Newcomer Erika Girardi has been asked back. Lisa Rinna will be back but the actress is reportedly arguing with executives about compensation.

Who’s been fired? Tamara Tattles once again has the scoop on that information. Yolanda Hadid or Yolanda Foster, whatever she’s calling herself these days, is out. It would have been interesting to see Yolanda starting over post-divorce from David Foster, but Yolanda’s health comes first.

Newcomer Katheryn Edwards has been given the axe. Another one season wonder like Joyce Giraud and Carlton Gebbia from season 4 of ‘RHOBH.’ So, who is going to replace Kathryn, Yolanda and possibly Eileen Davidson? Tamara Tattles divulged that there are four women testing as replacements – she doesn’t know much and as Tamara says, “what I do know I am not willing to share.”