Elementary LIVE Recap: Season 5 Episode 3 “Render, and Then Seize Her” 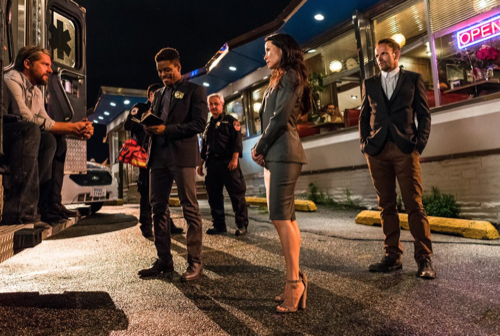 Tonight on CBS their crime comedy-drama Elementary premieres with an all-new season 5 episode 3 and we have your Elementary recap for you below. On tonight’s Elementary Season 5 episode 3 Sherlock (Jonny Lee Miller) and Watson (Lucy Liu) join the NYPD’s search for an abducted woman.

Did you watch the last episode of Elementary when the leader of a local street gang abducted Holmes (Jonny Lee Miller) to compel him to find the person responsible for a hit on his men, Holmes and Watson (Lucy Liu) got caught in the middle of an international hunt to recover a centuries-old, priceless artifact?  If you missed it and want to get caught up before tonight’s premiere we have a full and detailed Elementary recap, right here.

On tonight’s Elementary season 5 episode 3 as per the CBS synopsis, “Holmes (Jonny Lee Miller) learns a secret about Captain Gregson’s girlfriend when she hires him for a case she wants kept off of Gregson’s (Aidan Quinn) radar. Also, Holmes and Watson (Lucy Liu) join the NYPD’s search for an abducted woman.”

#Elementary starts with Paige in Gregson’s office eating Chinese food. Her fortune says good test results will soon be yours. She’s joking and tells her to call as soon as she gets her lab results. She says she feels good. She kisses him then goes.

Sherlock is looking at very old mug shots when Paige stops by to introduce herself to him. He asks if she retained any of her cop training and then mentions her scandal. She starts to walk off then says she wants to hire him on the sly.

A naked guy creeps up to window with his phone and takes a pic then texts. Someone catches him and shoots him even though he says it’s not what it looks like. Sherlock comes home with a large bag and Joan says she hopes it’s not a body.

Sherlock says it’s medical claims from a neurologist office. He says the doctor treats Paige and she thinks some of the staff there are engaged in a criminal enterprise. He says don’t tell Gregson and Joan agrees. He says he made copies and Joan says they’re auditing and goes for coffee.

Sherlock says Marcus texted about a death at a nudist colony. Kenneth Toland is the dead guy and the owner says he’s been coming there for years. She says he was a sweetie. She says the guy who took that woman from the news did this.

She says Beth Stone and shows them the video that Kenny sent her. It’s of the missing woman Beth Stone. She says that music was coming from the cabin and says no one should have been down there due to renovations.

Sherlock remarks on the smell of ammonia – the kidnapper cleaned the cabin and he and Beth Stone are gone. They take the footage to the husband who identifies her positively. They check out the case on the kidnapping. The husband reported her gone.

The cop working the case says at least she’s alive. He says they were worried because there was no ransom threat. The husband says he doesn’t get this. Mr Stone says their business is not really successful but they’re not broke.

They go look at security footage from when she was taken and the gun looks like the same kind used to shoot Kenny. Joan spots something on the roof of the van – she says it used to be a TV news van based on the metal work on it.

Sherlock says no luck at the nudie colony. Sherlock says three of the clerical staff are double billing and the doctor doesn’t seem to be in on it. Sherlock says he’s troubled by Paige’s file and hands it over. He says look at the payment – her insurance lapsed, she bounced a check, and is using credit cards.

Marcus found the van burned out by an overpass. Sherlock and Joan meet him there. He found the van via a classified ad. Gregson meets them and says no witnesses to the vehicle fire. Joan finds a phone with a SIM card in it. They bring in the husband and tell him they found calls to him on it.

They ask why he didn’t notify the police. Mr Stone says he can’t talk to them about it. He says the guy told him if he reported it, he’d never see his wife again. He says the voice was disguised and then won’t say anything else and asks them to leave.

Sherlock tells him he’s worked dozens of kidnap cases and says he must know how often kidnappings come to a bad ending. He says the longer she’s held, the more likely she’ll be killed. Stone won’t back down and Sherlock gives up and leaves.

Sherlock goes to find Aaron Stone’s right hand man and talks to him about Beth’s kidnapping. The guy says Aaron hasn’t told him anything. Sherlock says he heard Beth and Aaron were getting a divorce. He shows him an invite to their anniversary party next month.

He says Aaron would do anything for Beth then says he has to tell Aaron he was snooping around. Sherlock says be sure you’re acting in Beth’s best interests. Joan introduces Sherlock to Bruce who rents out an editing bay. He says he heard Aaron screaming about film footage.

He says they found something on 30-year old footage. He offers Sherlock some voice over work because of his posh accent and hands him a card. Sherlock sends Joan off to slow Marcus up while he breaks in to a room to try and see the footage.

Sherlock steals the drive. He and Joan watch the footage and find something in the background of some teens playing ball. There’s a murder in the background. Joan recognizes the case and says Quentin Latham was a union leader who took on the mob.

She says he went missing then his body showed up two years later. Sherlock asks why she was in grade school following mob murders. She says the mob guy is also running a stock scam and is about to go down for that too.

Paige goes to meet Sherlock who tells her about the clerks that are defrauding the office. Sherlock says he can send the file anonymously to the DOJ fraud unit. Sherlock asks Paige about her intentions to Gregson about their future. Sherlock asks if the captain knows she’s going broke.

He says will the captain pay your debt. Paige says she’s not going to bilk the man for money. Paige gets annoyed and says he’s good at his work then says she’ll send a check. She walks off. Marcus, Joan and Gregson arrest Dinatio. They tell him they know about his crimes.

He denies all of this and says they’re wrong about Latham. He shows them the footage they saw and says it’s not him. He says Aaron and Dennis came to him looking for an investment. He says they wanted $800k and says it’s CGI in an app. He says he asked them to make it.

He’s got the proofs of the rough work to confirm his story. Gregson asks how many people saw the footage. The guy says they showed people and it spread around among the monsters. Sherlock wakes Joan with Gimme Some Loving on violin.

He says he had a breakthrough on the case and thinks Dennis, the partner and employee, is the likely suspect. Sherlock shows her the employee contracts. Sherlock says Dennis has distinctive playlists he publishes and that aligns with Higher Love from the video.

Joan tells Marcus that Dennis finagled the video since that’s what he does. Gregson tells Sherlock they went to pick up Dennis. Sherlock tells Gregson that Paige is in financial stress. He tells Gregson to marry her so her treatments will fall under his insurance.

Gregson says Paige is opposed to the idea of marriage but he wants to marry her. Sherlock gives up and leaves. Dennis is brought in and quizzed. Dennis says it’s crazy and he was home when she was taken. They also have proof that he owns a gun.

He says why would I abduct someone who knows my face and Marcus says maybe he planned to kill her. Gregson ends the interrogation and says Beth Stone just turned up at a diner and says two kidnappers had her and Dennis doesn’t meet either description.

Beth says Rasha and Ali were the two guys and were Pakistani she thinks based on their accents. She has a very elaborate story about being held in a tent in the woods after they left the nudist colony. Aaron says the kidnappers asked for $3 million and he’s sorry he didn’t tell them before.

She is taken to the hospital and Sherlock tells Marcus that it’s absurd fiction and Dennis is the man in the video and they’re in on this together. Sherlock tells Joan that Beth was racist with her story. Sherlock says their pre-nup might lapse at the 10-year mark and their anniversary was coming up.

Sherlock says if Aaron couldn’t pay the $3 million, he’d be ashamed and couldn’t divorce her before their anniversary then she’d own a share of his profitable new software. Sherlock tells Joan that he told Gregson to marry his girlfriend. He asks Joan to play cricket in the house and hands her a ball.

Sherlock watches the news story about Beth and says her breasts are her undoing. They bring Beth and Aaron in to the cop shop. Sherlock asks Aaron about his divorce consultation and Joan mentions the pre-nup. Gregson says Beth was trying to guilt her husband.

Sherlock says they know the new software Dennis developed will bring in lots of money. Joan says she think Beth and Dennis did this together. She shows her ligature marks and Sherlock says those are self-inflicted and Joan asks when did she get the suntan she’s showing.

Gregson asks Aaron to step out so they can bring in a DA to offer her a plea deal since Dennis shot Kenny, not her. Later, Gregson sees Paige in his office. Sherlock asked her to come in and tells Gregson that he talked to Paige about marriage. Sherlock says he made progress.

Sherlock says the weekend getaway he mentioned would be a good time to elope and opens up a box that has six different engagement rings in it. Sherlock says it’s not about the insurance entirely since he knows Gregson wants to marry her. Gregson asks if the rings are hot. Sherlock points out one that’s cleaner. Gregson takes it. He goes in to talk to Paige. He offers her a ring.