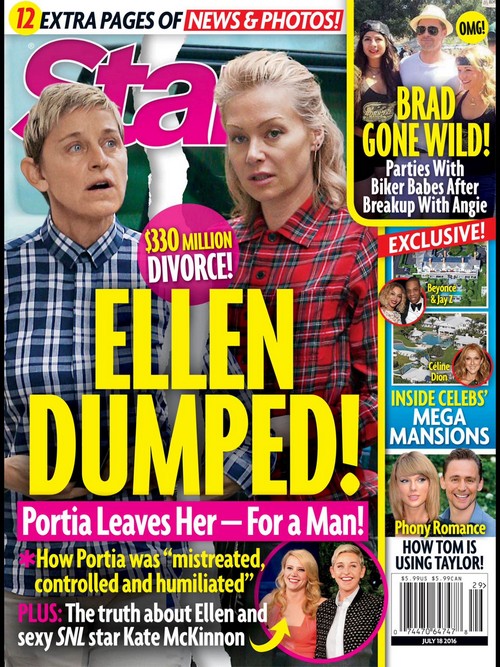 It’s no secret that Ellen DeGeneres and Portia de Rossi’s marriage has been on the rocks for years, but the divorce rumors have really been heating up lately, and according to a new tabloid cover – there may be some truth to them!

This week’s cover of Star Magazine features a photo of the problematic couple, and the headline reads, “$330 Million Divorce – Ellen Dumped!”

Long before Ellen DeGeneres and Portia de Rossi were married, Portia was actually married to a MAN. According to Star Magazine, Portia has decided to switch teams again, and is reportedly leaving Ellen for a man.

For years the tabloids have reported that Ellen DeGeneres and Portia de Rossi have a lengthy list of marital woes, from Ellen’s “controlling behavior” to Portia’s self-admitted eating disorder.

Star Magazine’s inside source revealed, “Portia is fed up with her wife’s controlling ways and humiliated by her endless flirting. While they act like they are crazy in love in public, Ellen and Portia have always had a contentious relationship behind the scenes.”

The source added, “Even more shocking, friends say Portia may have left Ellen for a man! There have been lots of whispers about it. But she was married to a man before, so it wouldn’t be totally out of the blue. Of course everything with them is always hush-hush.”

Rumors in Hollywood’s inner circle are that Ellen has mistreated Portia for years, so why did she finally decide she wanted a divorce? The tabloid report credits Ellen DeGEneres’ relationship with Saturday Night Live star Kate McKinnon as the final straw for de Rossi. Apparently, Portia was tired of being embarrassed publicly by Ellen and Kate’s not-so-subtle flirting.

Of course, Ellen DeGeneres and Portia de Rossi are mum on the latest divorce report. Ellen is all about saving face and keeping her wholesome image – so even if the rumors are true, the talk show Queen would never cop to them. What do you guys think?

Are Ellen and Portia finally going to file for divorce? Do you believe that Portia dumped Ellen for a man? Let us know what you think in the comments below!