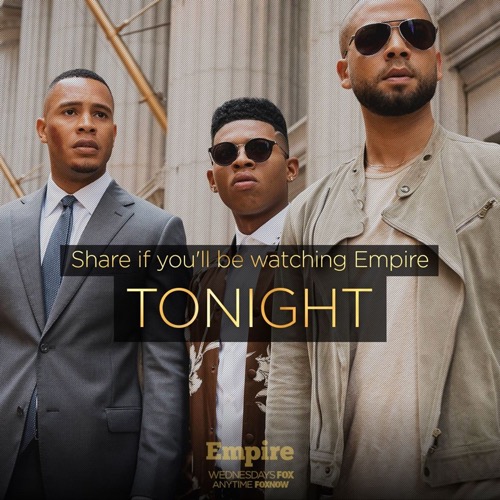 Tonight on FOX their blockbuster drama Empire premieres with an all-new Wednesday, September 28, 2016, episode and we have your Empire recap below. On tonight’s Empire season 3 episode 2 Hakeem enters the recording studio with Shine and Andre gets in trouble with the law.

Did you watch the Empire season 3 premiere where it picked up with Hakeem left at the altar and Lucious and Anika were newly married? If you missed it we have a full and detailed Empire recap, right here!

On tonight’s Empire premiere episode as per the FOX synopsis, “Jamal tries to turn his being shot into something positive when he teams up with a businessman to talk about gun violence and host a summit for awareness. But when he tries to perform again, things don’t go as planned. Meanwhile, Lucious attempts to get Cookie in his corner; Hakeem enters the recording studio with Shine and Andre gets in trouble with the law.”

Tonight’s episode of Empire kicks off with Cookie being woken up bright and early in the morning by a delivery, and then a second, and another one. Lucious is clearly trying to win her back. She freaks out when a life-size marble lion statue arrives and orders all the gift be returned ASAP.

At Lucious’ house, he gets quite a surprise when he wakes up too. Anika has the entire livingroom full of nannies that she is interviewing to help her take care of baby Bella. Lucious kicks all of the women out. Anika whines that she can’t raise the baby by herself and she needs help. He is not having it though – he sends Anika to the nursery and tells her she only has one job to do, and that’s to be a mother.

Jamal is participating in a radio show with a local politician named Angelo Dubois – they are discussing the matter of gun violence. Cookie sits in on their interview. Of course his incident last week where he ran off from stage comes up – Angelo announces that he thinks that Jamal has PTSD. Jamal and Angelo get in a heated debate about race, education, and opportunities for African Americans. Angelo publicly invites Jamal to visit one of his organization’s Anti-Violence summits.

After the interview, Cookie snaps at Jamal, she tells him that he has no time to go to the summit for his organization called “WOKE” because he is supposed to be making new music. Angelo corners Cookie and Jamal after the interview and tells them he looks forward to seeing them at the summit. Cookie storms off, she doesn’t trust Angelo because he is way too polite.
Lucious heads to the office and has to meet with Shine and Nessa – he isn’t too thrilled when he hears that Hakeem is working with Shine in the studio and wants Nessa on his tracks. Lucious scoffs that Hakeem doesn’t have time to work on new music, he has a baby at home to take care of.

Cookie storms in to Lucious’ office with all of the gifts that he sent her that morning. She tosses a diamond necklace on his desk and tells him he should give it to his wife. Cookie reminds him of their agreement, it’s only strictly business. Speaking of business, Lucious wants to release Jamal’s Black & White album on his new streaming music. Cookie tells him that it’s not happening, Jamal doesn’t want that music out.

Lucious runs in to Jamal in the Empire lobby, he has Angelo with him, and an entire group of teens from his WOKE program. Lucious is uncharacteristically kind, he invites Angelo to hold his summit at Empire headquarters and says that they are going to pay for the whole thing and stream it on Xstream. Before Lucious leaves he whispers to Jamal to have Cookie “handle everything.”

Luciosu is not giving up on Cookie any time soon. He heads to her office and plays a beat for her, he says it is for Jamal, but its actually the first song that Cookie ever rapped for her. Cookie has a flashback to when she and Lucious were teens. Cookie agrees to give Jamal the track – but she tells Lucious that she is not going to give in to him, he needs to back off.
Meanwhile, back at his apartment, Andre is not doing good. He’s running around the livingroom and shouting at Rhonda’s ghost. Jamal walks in and catches him talking to his dead wife. Andre shows Jamal all of his pill bottoms and cries that he doesn’t know what ones he is supposed to be taking – Rhonda took care of all of that for him. Jamal gives Dre a pep-talk and says that he is going to make him a chart so that he can keep track of his pills.

Later, Cookie finds Lucious and Angelo in the lobby setting up the summit for the anti-violence event. Cookie is floored – she snaps at Angelo that she knows he is using her family. She shouts that he is a joke and she knows all bout his DWI from 20 years ago, after a typical Cookie rant, she stomps off and leaves Angelo totally bewildered.

The next morning Cookie is woke up bright and early…again by Lucious. He brought along their old friend Biz to serenade Cookie with the song that she heard him rapping the first time that they met. Cookie and Lucious share a sentimental moment, and then she shuts him down and tells him that she is done…again.

While everyone is dealing with all of their drama, Hakeem and Nessa have spent that last few days in the studio and have been cooking up a new song together. They might have a hit on their hands. Shine stops by to check on them and listen to their new music.

Later that night it is time for the big event at Empire. Angelo arrives with the WOKE kids and they perform a song. Angelo gives a moving speech, and it looks like Cookie is starting to come around and might be starting to develop a bit of a crush on him. Lucious heads up on the stage and also gives a speech. Then, he calls Jamal up on the stage and tells him to perform a song in front of everyone. Jamal is totally on the spot and Lucious and the kids start cheering his name.

Jamal starts hyperventilating and runs out of the summit. Cookie chases after Jamal and comforts him – Lucious scoffs that he needs to stop acting like this and deal with his problem head on and get back on the stage.

Later, everyone is mingling, and Lucious is still buttering up Cookie. Angelo interrupts their chat – and Cookie flirts with him shamelessly right in front of Lucious. Things get awkward very quickly.

Upstairs in the office, Becky is thrilled to see that J Poppa has returned. He tells her that he has decided to leave Empire, Vaughn gave him an offer he can’t resist. And, he negotiated for Becky to go with him to the label. Becky doesn’t want to leave the Lyon’s, but J Poppa points out that it is only a matter of time before the feds come through and take the whole label down.

Tonight’s episode of Empire ends with Tariq sitting at home and eating a bowl of cereal, watching the live feeds in Bella’s nursery. Lucious falls asleep with the baby again, and Anika puts her to bed. The baby monitor picks up static in front of Tariq’s hidden camera. She realizes that it is some sort of recorder. Lucious wakes up and they put two and two together – he rips the camera out of the toy.

Tonight’s episode ends with Andre heading to his old house to pack up the rest of his things. Two cops arrive while he is loading his car. They say that he looks suspicious and there have been a lot of break ins. When Andre tries to get his ID out of the car, they pull their guns on him and slam him on the ground an handcuff him.