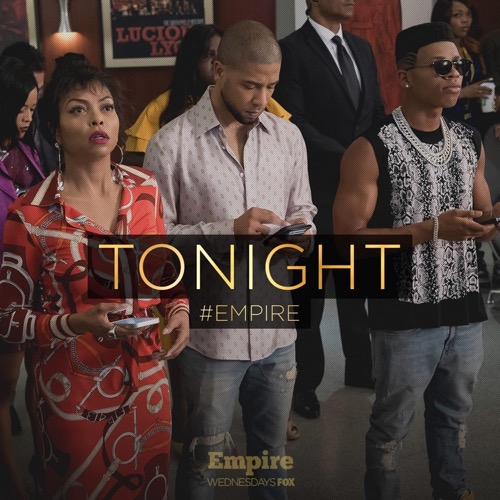 Tonight on FOX their blockbuster drama Empire airs with an all-new Wednesday, November 16, 2016, episode and we have your Empire recap below. On tonight’s Empire season 3 episode 6 the hacking of Empire leads to feuds breaking out between the artists and members of the Lyon family and Andre (Trai Byers) tries to use the leak to his advantage.

Tonight’s episode of Empire kicks off with Angelo showing up at Cookie’s doorstep with her morning coffee. They flirt, but Cookie shuts him down, she wants to wait for their “first time” because he is in the middle of running for mayor and she doesn’t want him distracted.

At Lucious’ house, Anika is trying to comfort the baby in the nursery. Lucious’ jokes that she sounds like a “wounded wilderbeast” when she sings. Lucious has good news, he has made Anika head of Shyne’s AR team since she helped him out.

The Lyon’s have a serious problem. Someone has hacked in to their computer system and is leaking Tiana’s single. Lucious calls an emergency meeting with the cyber team, they reassure him that the streaming service hasn’t been compromised…yet. Lucious thinks that Vaughn is responsible, he tried to buy the streaming service but Lucious shut him down.

Hakeem is in the studio with Nessa working on another single. Andre interrupts and things get awkward. Andre takes Hakeem aside and tells him to fall back – it looks like they are in a full-blown war over Nessa.

Lucious calls Vaughn to his office and accuses him of hacking Empire. Vaughn says he has the wrong guy, he has nothing to do with it. While they are talking, the tech guy runs into the room. Things just went from bad or worse, the hackers have every single email ever sent in Empire’s network and they are going to leak them all if Lucious doesn’t wire them a million dollars.

Lucious and his team begin scrambling to try and find the hacker and stop all hell from breaking loose. If their emails go public, they are in serious trouble. Meanwhile, Angelo is giving a campaign speech and Cookie is there to cheer him on. She gets a frantic phone call from Lucious who says she needs to get down to the office for an emergency board meeting.

Meanwhile, Angelo is giving a campaign speech and Cookie is there to cheer him on. She gets a frantic phone call from Lucious who says she needs to get down to the office for an emergency board meeting.
At the meeting, the board tells the Lyon Family that they should pay the ransom, but Lucious refuses, he doesn’t negotiate with terrorists.

Everyone on the office is turning on each other because all of their dirty laundry is being aired online. And, it gets worse – now the emails are being broadcasted on Empire’s streaming service, including nudes that Cookie sent to Angelo. Shyne shows up in the lobby to rub Lucious’ face in what is happening, Lucious flips a lid and throws a chair across the room.

Lucious is not happy that Cookie has been sending nudes to Angelo. Anika shows up with Shyne, he trades insults with Cookie before she storms out of the office. After Cookie leaves, Shyne reassures Lucious that he had nothing to do with the hacking. Lucious receives another message from the hackers saying that they are about to release more dirt.

The emails are hurting everyone, even Jamal. He learns that he has been receiving gay hate threats in his emails this entire time, but Cookie and Lucious have been making sure that he never seen them. Jamal discusses the hack with his new friend from PTSD meetings, he thinks that the hacker is someone who personally knows his family and wants to hurt them.

Angelo’s campaign is taking a hit because of Cookie’s nude photo scandal, she pays him a visit and breaks up with him. Angelo tries to argue with her, but Cookie won’t hear it, she doesn’t want to be the reason he doesn’t win the election.

The security team sweeps the building at empire and finds a keylogger in Tiana’s studio – she confesses she had Graham in there a few days ago. Lucious is sure that Graham is their hacker, he and Andre head to Graham’s house to confront him. Graham denies it, but Andre goes through his computer and finds proof that he hacked in to their servers.

Despite all of the proof, Graham still insists that he is innocent and not responsible for the hacking. Shyne and this thugs arrive to rough up Graham, Lucious tells Shyne to save him a souvenier and he and Andre leave before it gets too messy.

Later that night, the Empire team celebrates their victory against the hackers. The board even names Andre President of XStream since he handled the hacking so well and saved the day. They top off the big day by Nessa and Hakeem taking the stage and perform their new song.

While everyone else is celebrating their victory, Jamal stays home alone in his apartment. He’s still upset about the hate mail that as leaked, and it looks like he is falling off the wagon. He calls Derek and leaves him a voicemail, he confesses in the message that he is not doing so well. It’s not long before Derek shows up to comfort Jamal, and they wind up hooking up.

At the FBI Tariq and his partners are going through all of the leaked emails. Tariq thinks that he has found proof that Lucious orchestrated frank Gathers’ murder in prison in one of the emails.

Derek and Jamal fall asleep, a few hours later, Derek wakes up and Jamal is unconscious. He slaps his face and shouts at him to wake up – but Jamal is not okay. Derek calls Phillip and tells him to come over ASAP, he thinks that Jamal overdosed. Philip saves the day and puts Jamal in a cold shower and gets him to wake up.

Tonight’s episode ends with Andre taking Nessa with him to a secret meeting Vaughn. Andre pays Vaughn, he paid Vaughn to hack Empire and leak the emails because he knew that he could save the day, and his father would name him President at Empire. Andre played everyone. He tells Nessa that they are going to combine their strengths and take over the world together.