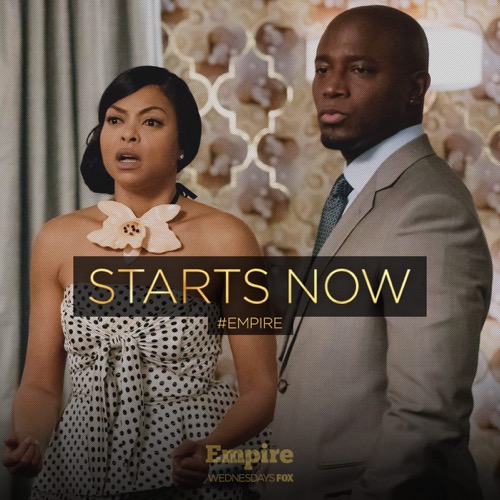 Tonight on FOX their blockbuster drama Empire airs with an all-new Wednesday, November 30, 2016, episode and we have your Empire recap below. On tonight’s Empire season 3 episode 7 as per the FOX synopsis, “Cookie (Taraji P. Henson) turns to Candace (Vivica A. Fox) for help planning an elaborate family dinner that will impress Angelo’s (Taye Diggs) mother; at the same time, old home videos from Cookie’s childhood force her to face the truth about her father. Meanwhile, Andre (Trai Byers) plans an unlikely duo.”

Tonight’s episode of Empire kicks off with Cookie up bright and early in the morning – she’s arguing with Tiana on the phone, she shouts at Tiana that she needs to get in the studio, Tiana hangs up on her.

There’s a knock at the door – it’s Angelo. Cookie tried to break things off for him for the sake of his political career, but the future mayor won’t take “no” for an answer. He demands to know if Cookie is “in or out.” She jumps on top of him and starts kissing him and ripping off his clothes.

At Empire, Lucious has called everyone in for a meeting – they just got slammed by Charlemagne. Lucious is not happy with Jamal, he blames him for the numbers on the online streaming service dropping. Lucious points out all of the money that the company is wasting on Jamal’s studio time and producers because he isn’t making any music. Jamal storms out.

Nessa pays Andre a visit – she invites him to her brother Stone’s memorial, it’s a family thing but she wants him there. Andre accepts her invitation, then Shyne marches in. He’s not a happy camper. Shyne is furious that Lucious duped him in to working with Freda, because Freda refuses to record any music under Empire’s label. Andre promises to talk to Freda and says he will bring her to the memorial with him. Cookie

Cookie pays Jamal a visit at his house, he shows her the music library that he has been spending all of this time working on – which comes with videos. Jamal incorporated his family’s old home videos, including when Cookie was a little girl. At first Cookie is loving it, then she freaks out and shouts at Jamal that he had no right to use the videos and runs out. Apparently, she wasn’t in the mood to take a trip down memory lane.

Cookie is supposed to meet up with Angelo and his mother at a high-society party his family is holding. But, Cookie stands them both up after she is rattled by Jamal’s videos.

Jamal pays Aunt Carol a visit to find out why his mom freaked out over the home videos that she gave him. Carol explains that it goes all the way back to when Cookie first met Lucious – and those home videos will reveal a story that has never been told.

Cookie meets up with Angelo after the party she ditched, she apologizes to him and explains that she saw some home videos that rattled her. Cookie reminisces about when she was a teen and met Lucious, she was dating another guy at the time and she wishes she had listened to her father and stayed with him.

One night Lucious dropped Cookie off late at night, and her Dad found drugs and a gun in her stuff, he kicked her out of the house and said that she couldn’t live there anymore because of her little sisters.

Angelo reluctantly agrees to let Cookie try to meet his mother again. They are going to have a private dinner, and Angelo wants Cookie to bring her sons along too. Cookie heads over to Lucious’ house where Hakeem is visiting the baby and tries to convince him and Andre to come to dinner with her new boyfriend.

Later that night, Cookie heads over to Jamal’s house to have dinner and talk about the videos. She explains that the old videos brought up a lot of stuff that she didn’t want to think about. Cookie has another flashback after her dad kicked her out, he had a heart attack and her sisters wouldn’t let her go to the hospital. Cookie’s dad passed away that night, and she never went home again, then it was just her and Lucious against the world. Cookie reluctantly gives Jamal permission to use the videos, and then she convinces him to come to dinner with Angelo and his mom.

Cookie reluctantly gives Jamal permission to use the videos, and then she convinces him to come to dinner with Angelo and his mom.

Meanwhile, Lucious gets wind of Cookie’s big dinner, and he does everything in his power to ruin her plans. First he has her blacklisted from every restaurant in town so Cookie can’t get reservations. Then, he tells Hakeem that he has to watch Baby Bella and can’t go to the dinner.

Cookie, isn’t letting Lucious stop her, she decides to have the dinner at her house. Cookie and her sister spend all day getting the house ready, and order all new furniture and décor. Cookie’s determined to make sure the dinner is perfect.

Jamal arrives at Cookie’s house first, he just came from the studio, and his mom can tell that he is high as a kite. Jamal says that he just started new meds, and they are making him a little loopy. Cookie slaps him and tells him to go splash some water on his face. While Jamal is in the bathroom, Angelo shows up at the door with his mom Diana, they make awkward introductions and it is obvious Angelo’a mom is not impressed.

Jamal is flopping around the house acting like a “free spirit,” as Angelo puts it. Cookie is rambling and trying to make conversation. Then, Hakeem storms through the door cursing, and carrying the crying baby. He passes her off to Cookie and asks her to make the baby stop crying. Angelo’s mom watches in horror. The big dinner has turned in to an official hot mess.

As if things couldn’t get any worse, Anika and Luious storm through the door, looking for baby Bella. Lucious introduces himself to Diana, then explains that he is married to his son Hakeem’s baby mama.

Nessa thinks that Andre stood her up and isn’t coming to the memorial party. He actually shows up though, and as promised he brought Freda along with him. Andre wants to leave and go to Cookie’s house like he promised he would, but Nessa won’t take “No” for an answer. She gets up on stage and sings a song in honor of her brother.

Cookie gives Diana a moving speech about how twisted her family is, but she wouldn’t change her sons for anything, no matter how crazy, lazy, or gay they are. Jamal takes a seat at the piano and serenades everyone with a song that he wrote about Cookie, and what he learned about her relationship with Lucious and her father passing away.

After everyone clears out, Cookie has a one on one with Diana. Diana can relate to Cookie and her family, but she warns Cookie that she better not burn her only son.

At Stone’s party, Freda is moved by Nessa’s song about her brother getting shot – and she actually gets up on stage and performs. It looks like Andre worked his magic and got through to her. Meanwhile, Shyne is secretly recording the whole performance on his phone.