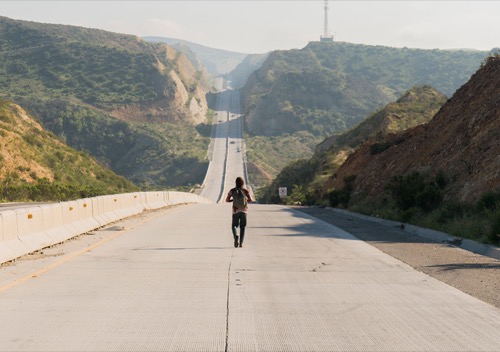 “Fear the Walking Dead” spoilers show that Nick Clark [Frank Dillane] and Rick Grimes [Andrew Lincoln] have some similarities. Was does this mean for both of AMC’s horror shows? Is a crossover of some sort planned?

Here’s what has been seen so far to makes viewers think that TPTB have a crossover storyline planned for “Fear the Walking Dead” and “The Walking Dead”.

Nick woke up in a building full of walkers – perhaps soon to be walkers – which is what happened to Rick when he came out of his coma. Then there are the image stills AMC has released for the “Fear the Walking Dead”.  You decide if these are “The Walking Dead” spoilers about some kind of series’ crossovers.

A new still released by AMC shows Nick walking down a deserted highway. (Above) Go back and look at the promo artwork for season 1 of “The Walking Dead”. (below) There’s Rick riding down a highway on a horse. 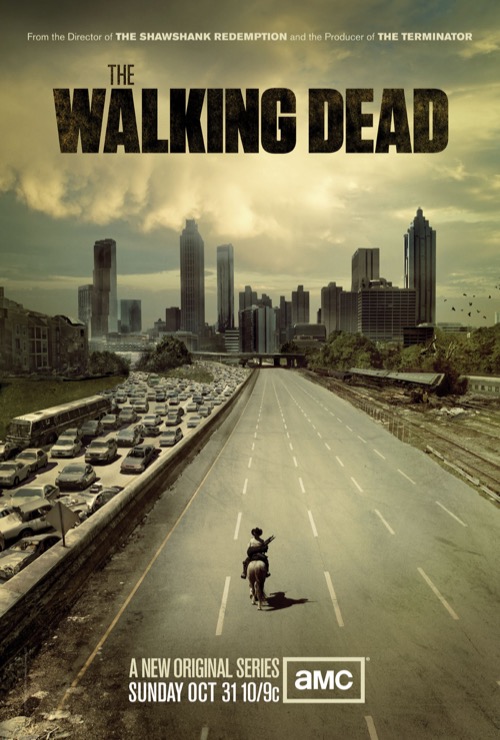 Interestingly enough the two horror shows both started off with an accident. Rick was shot in “The Walking Dead” and Nick was hit by a car in “Fear the Walking Dead”.

The similarities keep coming. After their respective accidents both Rick and Nick spent time in the hospital. Not uncommon after you’ve been shot or hit by a car.

Both guys wear bloody clothing so they can blend in with the undead. Again, not all that uncommon. After all, who would want to stand out in a crowd of undead people?

Rick and Nick certainly have their differences. Rick was in a coma during the beginning of the zombie apocalypse. However viewers weren’t disappointed – the writers gave them a look at the how the zombie apocalypse went down while Rick was out of commission. Rick started off as a good guy on The Walking Dead.

Of course, Rick didn’t stay good forever, how could he? During season 6 Rick disappeared and came back ready to kill others instead of letting them kill his people first. Rick basically became a bad guy.

Nick, on the other hand, started off “Fear the Walking Dead” as a thieving junkie who would do whatever necessary to get his next high. Then Nick made a turnaround, struggling through withdrawals and fighting the demons within. So, has Nick become a good guy?

So what do you think “Celeb Dirty Laundry” fans, are these hits all leading up to a “Walking Dead” and “Fear The Walking Dead” Spoilers?  VOTE, in our poll below

Share your thoughts in the Comments section below, on our Facebook Page,  join our Facebook Group or Head over to our Discussion Board to Talk Fear The Walking Dead!