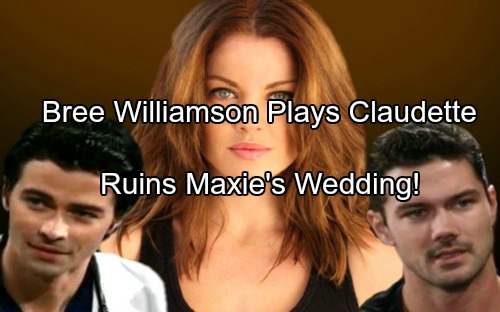 “General Hospital” (GH) spoilers indicate that the mysterious Claudette (Bree Williamson) will soon throw a monkey wrench into the wedding plans of Maxie Jones (Kirsten Storms) and Nathan West (Ryan Paevey). Can these two survive the inevitable arrival of Claudette in Port Charles?

First of all, Daytime Confidential leaked that former OLTL star and fan favorite Bree Williamson has been cast as Claudette – thats great news for General Hospital as Bree is known as a real crowd pleaser and her presence should help ratings.

Remember Maxie had one foot out the door ready to go to New York City and look up Claudette based on the information that Sam Morgan (Kelly Monaco). But then the Carlos Rivera (Jeffrey V Parise) escape attempt left Nathan in dire shape and voided that NYC trip.

Given that Maxie almost lost Nathan to yet another injury, will she now take Lulu Spencer’s (Emme Rylan) advice and let the Claudette issue go? Even if Maxie backs off investigating Nathan’s ex, the issue will not go away and will get more intense very soon.

One bright spot in all of this is that with Claudette teased to arrive in Port Charles as early as June, GH fans can finally put to bed the ridiculous talk that Griffin Munro (Matt Cohen) is Claudette and transitioned to a dude after a split with Nathan…

In coming days, Claudette will reach out to Nathan and other GH spoilers hint that Nathan decides he needs to come completely clean to Maxie about his past with his ex-wife. But will Nathan really spill the beans or will he fail to be forthcoming once again?

If Nathan doesn’t tell Maxie what happened with Claudette and then Claudette shows up and Maxie hears the whole sordid tale from her first, how will that affect their relationship? GH spoilers tease that Claudette could wreck their wedding plans and Maxie may not get her man.

Also, with the arrival of Claudette in Port Chuck, the strange entwined history of Griffin and Nathan will be revealed and that will make Nathan look worse. We’ll also learn more about who Griffin was before he put on a priestly collar.

Did Nathan and Claudette drive Griffin to give himself to the church because of the sins he committed that tie to their troubled relationship? If Maxie and Nathan’s wedding plans are demolished, will Maxie end up with Griffin?

Will Nathan get another shot at love with Claudette since he’s clearly haunted by her and still cares for her? What do you think GH fans, would you rather see Maxie with Griffin or Nathan? What other secrets might Nathan be hiding about his unpleasant past with Claudette?

Share your comments below and check back with CDL every day for more “General Hospital” spoilers and news.