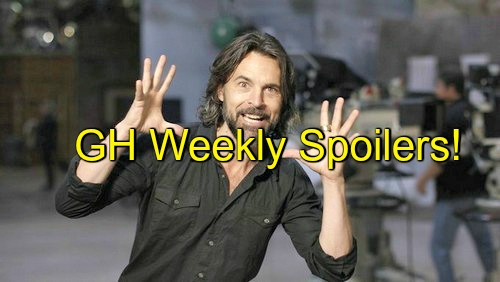 Here’s what you’ll see next week on new episodes on General Hospital.

Paul Hornsby (Richard Burgi) thinks Anna Devane’s (Finola Hughes) quest for revenge has led her astray in a major way but he still doesn’t tell Jordan Ashford (Vinessa Antoine) what Anna did to him. Paul goes to Julian Jerome (William deVry) to warn him about the hunt for the hitman.

General Hospital spoilers say Julian comes clean to his sister about what he’s done while Anna and Sonny come face to face with Carlos. Shots are fired this week and danger abounds. Michael Quartermaine (Chad Duell) gets an update from Sonny about Sabrina Santiago (Teresa Castillo).

Sonny and Anna are accused of being hypocrites in this matter and Anna insists she’s willing to face punishment so long as Carlos and Julian go down for killing Duke Lavery (Ian Buchanan). Sonny decides to change the path he’s on after an encounter.

Morgan Corinthos (Bryan Craig) is ready to get healthy as he and Kiki Jerome (Hayley Erin) decide they want a life together. Kiki surprises Ava Jerome (Maura West) while Morgan also stuns his parents with his commitment to a new route in life.

Kiki needs to deal with some of her issues and decides to try art therapy with Franco (Roger Howarth). GH spoilers predict that Franco has yet another unpleasant encounter with Carly Corinthos (Laura Wright). Carly also has a strange run-in with Finn Hamilton (Michael Easton).

Carly finds Finn in a predicament and tries to help him. They grew closer as a result. Also getting closer are Dante Falconeri (Dominic Zamprogna) and Lulu Spencer (Emme Rylan). Meanwhile, Valerie Spencer (Brytni Sarpy) wonders how she feels about Curtis Ashford (Donnell Turner).

Maxie Jones (Kirsten Storms) and Nathan West (Ryan Paevey) talk more about Claudette and Maxie thinks he’s still hiding something. Nathan presses her to drop it and she agrees but does just the opposite. Later, Nathan goes to his sister for advice.

Dr Liesl Obrecht (Kathleen Gati) also has advice on love – but hers is for Franco. Monica Quartermaine (Leslie Charleson) wants Finn to stick around – no doubt he’ll agree. Jordan and Paul wonder if Anna is safe while she’s pursuing Carlos.

Jordan and Andre Maddox (Anthony Montgomery) clash when their jobs come to cross-purposes yet again. Laura Spencer (Genie Francis) tries to unravel the clues in the book and her quest to figure out Helena’s parting gift takes her off in a new direction.

Nikolas Cassadine (Tyler Christopher) finds himself threatened on two fronts. Jason Morgan (Billy Miller) tries to get the ELQ shares Nikolas took from the Qs while Hayden Barnes (Rebecca Budig) pressures Nikolas to sign ELQ over to her.

General Hospital spoilers ask what will the dark prince do? Jason goes back to the Qs with good news about the family company and they’re happy. Hayden also has reason to celebrate but is that about ELQ or her marriage to Nikolas? Hayden decides to change her approach.

Tracy Quartermaine (Jane Elliot) continues her strange behavior that has her family worried about her even though the change is pleasant. Tracy later has a rude awakening but should be pleased by what Jason has done for the family.

Don’t miss this coming week’s episodes from Monday, April 11, through Friday, April 15, and come back to CDL every day for detailed “General Hospital” spoilers, news and more.