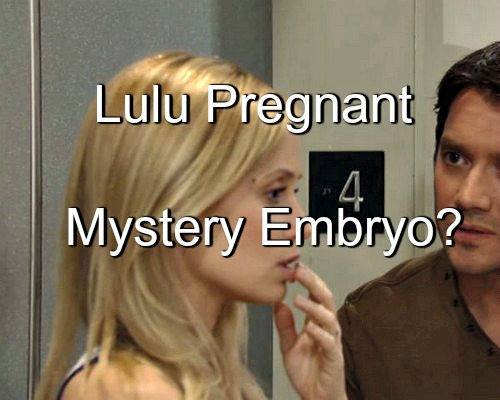 “General Hospital” (GH) spoilers reveal on next week’s episodes that Dante Falconeri (Dominic Zamprogna) and Lulu Spencer (Emme Rylan) are going to start moving faster now that they’ve re-consummated their relationship and are mending fences in their marriage. Could a new baby be next?

GH spoilers for May sweeps reveal that Dante and Lulu will make some decisions about their future including going after something they’ve long desired. Sounds like Dante and Lulu are ready to get in the baby making business.

You’ll recall that Dante and Lulu were just on the cusp of unfreezing their embryo and implanting it when Dante’s cheating with Cousin Valerie Spencer (Brytni Sarpy) came out. Lulu told Dr Kelly Lee (Minae Noji) to forget it and they never thawed out the fertilized egg.

But now that Dante and Lulu are back on, Valerie is out of the picture and dating Curtis Ashford (Donnell Turner) – and Lulu and Valerie have made peace, General Hospital spoilers say that it sounds like a good time to start working on the baby. But will that go as they expect?

Remember, Helena Cassadine (Constance Towers) left Lulu that empty envelope and said “Lulu has done the most for me. More than she’ll ever know.” Then she added “there may come a time when your life is empty and this will give you what you need.”

We still don’t know what that envelope means, if there’s invisible ink on it, or whatever subterfuge Helena meant by that. But what seems more likely is that what Lulu did for Helena is unwillingly give up an egg to be fertilized by Stavros to make an embryo.

Once Dante and Lulu decide to move forward with implanting their embryo, will it be there? Did Helena somehow have it destroyed? Or did she perhaps replace their embryo with the Stavros-Lulu one? Another terrifying option is that Helena used the embryo and grew it in a surrogate.

Lulu might have a one or two-year-old child out there somewhere if Helena decided to go ahead and try and grow herself a replacement Stavros. It looks like May sweeps may contain more information on the mysteries Helena left behind.

But how long will it be before Lulu finds out whether the embryo they have in storage is valid? Surely Lulu and Dante’s marriage is strong enough to withstand any news on that front, right? Helena seemed certain that Lulu would find her life empty at some point.

But right now, it seems like Lulu’s life is getting fuller – she and Dante are back on, they got a new bed, broke it in, re-sparked their marriage and all seems good. Maybe Helena’s threats will come to nothing – at least in Lulu’s case. Nah. Disaster is looming!

What do you think GH fans? Will Dante and Lulu get the second baby they want so badly? Or has Helena tampered with their happy ending from beyond the grave? Share your comments below and check back with CDL often for more “General Hospital” spoilers and news.