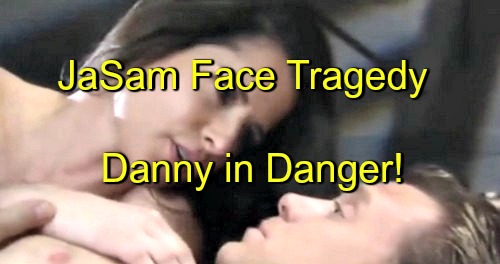 “General Hospital” (GH) spoilers reveal on next week’s episodes that Jason Morgan (Billy Miller) and Sam Morgan (Kelly Monaco) will face heartache in coming days. Spoilers reveal that they must face a tragedy together. But what is it? Is Danny in danger?

May Sweeps on General Hospital brings nothing but trouble for the newly reunited JaSam – they just got a stalker and that’s just the tip of the suffering coming their way. Worse is that Jason and Sam are so hyper-focused on Franco (Roger Howarth), they won’t be aware of the real danger for a while.

Things will escalate and an event on the night of the Nurse’s Ball sends them out of town on a dangerous pursuit. GH spoilers for sweeps indicate that Jason and Sam face a tragedy – with both of them involved, does that mean it has to do with Danny?

If Danny is left with a sitter while Jason and Sam are at the Nurse’s Ball, that would be a perfect time to snatch the kid – and would guarantee that Jason would follow wherever he had to in order to get his son back.

Also, Danny has had almost no screen time with his parents, so it seems like he’s overdue. Jason has been seen lately only with Jake Spencer (Hudson West) but with Sam also being victim of the tragedy, that sounds like Danny that’s at risk.

But what enemy is this? Who would take Danny? Let’s face it, Jason has a legion of enemies. He and Sonny Corinthos (Maurice Benard) have wiped out most of several mob families that might be back for retribution.

It could also be leftover trouble from Jason’s time with Helena Cassadine (Constance Towers). One thing we know is this – Franco truly is reformed, would NOT harm Danny and is NOT likely to be the harbinger of doom that visits Sam and Jason.

General Hospital spoilers say Franco is a red herring that distracts them for a while – but once tragedy strikes, Sam and Jason will know they spent weeks looking in the wrong direction and missed the real danger sneaking up on them. But by then it will be too late.

What do you think GH fans? Who would snatch Danny from his parents? Will Danny be harmed by Jason’s enemy? How grave is the danger that Jason and Sam will face? Is this an old enemy Jason knows or one he never knew he had?