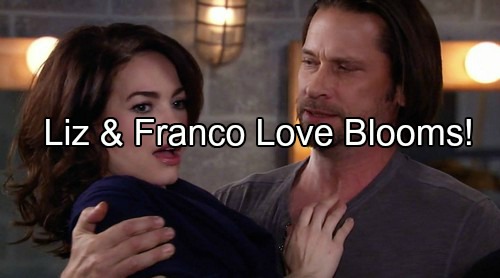 “General Hospital” (GH) spoilers tease that Jason Morgan (Billy Miller) may not want Liz Webber (Rebecca Herbst) as his lady love, but he also thinks he has the right to an opinion on any future love interests Liz considers. And Jason is not happy at all that Franco (Roger Howarth) is sniffing around his ex-fiancée.

Liz comes with a lot of baggage so a lot of men in Port Chuck might run screaming from her. After all, she’s got three kids by three different baby daddies, one of which is a terrifying (former) mob hit man, one is dead, and one is gone, gone, gone.

Liz clearly needs someone to step up and play daddy. Plus, there’s the fact that the whole town knows she lied and kept Jason in the dark about his identity and tried to drag him down the aisle to marry her despite knowing he was already hitched to Sam Morgan (Kelly Monaco).

What guy would step into all that hot mess? Well it would have to be someone with a messed up past all of his own. And who has a more convoluted history than Franco? In a way, Franco is the perfect match for Liz because they are in no position to judge one another.

Plus, even though Liz has a troubled kid in Jake and possible fire bug in Aiden, Franco is not put off by problem kids – as long as they don’t have his DNA. Jake is already deeply attached to Franco and Liz’s other two rug rats will probably dig him too.

Liz faces a bit of embarrassment at the Nurse’s Ball and GH spoilers indicate Franco will swoop in and help her side-step any drama. That further endears Franco to Liz, but Jason will notice – and he won’t like it one bit. Jason already tried to oust Franco from their lives once.

And while Liz initially agreed, now she’s backtracking because Jake clearly needs him around. That’s bad enough as far as Jason is concerned, but when it’s clear that Franco is developing a romantic interest in Liz, that will cross the line for Jason. It’s going to be a major source of contention.

The good news is, the drama and conflict that the Franco and Liz pairing will stir up should help Liz move past Jason once and for all. When Jason observes Franco showing clear interest in Liz, he will make some comments that infuriate Liz.

For instance, it won’t be surprising at all if Jason tells Liz that the only reason Franco is hanging around is to make him angry. That will set Liz off. Jason has moved on with Sam but will essentially tell Liz that Franco doesn’t like her for who she is, but it’s all about the Jason-Franco dynamic.

Admittedly, annoying Jason is icing on the cake for Franco, but he genuinely likes Liz and feels a lot of compassion for her tough situation. Liz will bristle at the idea that she’s not enough of a woman to attract Franco and that Jason is the real attraction.

Of course, dating a notorious reformed killer doesn’t exactly help you fly under the radar, but Liz will soon find herself growing attracted to Franco as well. And the idea that it annoys Jason will appeal to Liz too since she’s still a little stung by Jason choosing Sam over her.

By next week’s episodes, Franco and Liz will share their first kiss and while it may be a slow burn, sparks will fly. Liz will likely fight her attraction to Franco because of all he represents. But as he’ll remind her, she was dating a mob hit man before and even had a child with him, so Franco isn’t so bad by comparison.

What’s more, Jake will be thrilled to have Franco around. Liz forming a happy family unit with Franco will infuriate Jason and drive a wedge there. But then again, maybe a wedge is what’s needed to kill any residual affection and interest Liz has for Jason.

After all, Jason is all about Sam now and they seem to be locked into moving forward together so Liz needs to shut down her feelings for Jason beyond respecting him as a co-parent. Looks like Jason will have to adjust to having Franco in their lives – or risk losing Jake’s affection.

What do you think GH fans? Do you like the Franco-Liz pairing? Do you think Jason will go postal when he finds out their romance is really happening? Share your comments below and check back with CDL often for more “General Hospital” spoilers and news.