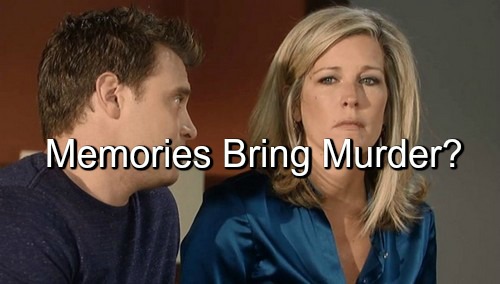 “General Hospital” (GH) spoilers have teased for some time that Jason Morgan (Billy Miller) would soon recover all of his memories but a batch he’ll recover soon could prove lethal for Franco (Roger Howarth). Franco did bad things to Jason and his loved ones, so what happens when Jason remembers?

Carly Corinthos (Laura Wright) flat out told Franco she couldn’t wait until Jason remembers what Franco did to her, Sam and Liz so that he’ll kill Franco. Of course, Carly is mad that Franco exposed all her dirty laundry at their “wedding” a couple of years ago.

You’ll recall that Carly was keeping the secret that Sonny Corinthos (Maurice Benard) shot AJ – plus she was cheating on Franco with Sonny. But Carly’s right on one count – Jason may want to kill Franco once he gets his memory back.

We can’t forget what Franco is responsible for in terms of Michael’s (Chad Duell) suffering in jail and afterwords. For this alone Franco deserves to be killed, tumor or no tumor. It’s pretty certain that neither Sonny nor Carly would shed a tear if Franco bought it.

Recent GH episodes have made it clear that Jason is already annoyed at how much Franco has insinuated himself in their lives. Liz Webber (Rebecca Budig) clearly sees Franco’s value to their son Jake, but Jason is struggling to accept it. That struggle will only intensify when Jason’s memories return.

General Hospital spoilers suggest that since Jason wants people to see him as a new, non-Stone Cold Jason, it isn’t fair for him to hold Franco accountable for his past misdeeds when Franco is now also a new person? Franco had a tumor making him a sociopath while Jason had a traumatic brain injury.

In reality, there are a lot of parallels between Franco and Jason. Both were killers – unrepentant in fact. The primary difference was that Franco had an element of torment to what he did. Jason didn’t care about those he killed, but he also didn’t relish killing people thus, he acquired his moniker ‘Stone Cold.’

Franco, of course, tormented Jason’s loved ones with creepy videos, notes and other schemes – and that will be the hard part to get back. Carly has told Sonny she wants less violence in their lives, so when Jason reveals his Franco memories are back, will Carly still encourage Jason to get revenge?

And does Carly have any room to talk? Carly forgave Franco for all his past cruel actions and was in a relationship with him. She was even going to marry him – except for Franco finding out about her cheating. So does Carly want Franco dead because he humiliated her (which she deserved) or for what he did to Michael – two good reasons right there from Carly’s prerspective.

When Jason’s memories come back, will he insist to Liz once again that Franco has to be ousted from their lives? But remember, Liz has also forgiven Franco for what he did to her too because she acknowledges he’s not the same person.

Plus, Liz will continue to bond with Franco over him helping Jake. So by the time Jason goes to Liz, she’ll see that Franco has too much value in her life and in Jake’s to let him go. Sam Morgan (Kelly Monaco) will no doubt take the side that what Franco has done is unforgiveable.

GH spoilers ask if Liz will have to remind Jason of his own murderous past to slow his roll? Are we about to see Liz and Jason in their first major showdown since their split? The bottom line is that Jason doesn’t want to be a killer so he will not want to kill Franco (even though the temptation will be there).

The next best thing is to get Franco away from his family, but Liz will move to block that and if Jason tries to get Jake to turn his back on Franco that could go poorly. Jason may just have to suck it up and allow Franco in his life because of Liz and Jake.

We do have to wonder, though, even though Franco’s sociopathic tendencies are gone, did his obsessions with Jason also evaporate with that tumor? Share your comments below on what you think Jason will do when his memories of Franco return.

And come back to CDL often for more “General Hospital” spoilers and news.