General Hospital (GH) Spoilers: Julian Attacks Alexis Over Bloody Shirt – Julexis All Over But The Crying 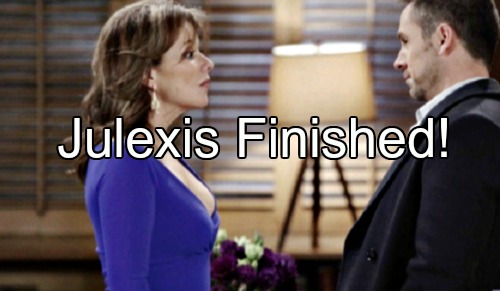 “General Hospital” (GH) spoilers for this week’s episodes reveal that neither Alexis Davis (Nancy Grahn) nor Julian Jerome (William deVry) have covered their tracks very well lately and Julian will find out that Alexis is scheming to take him down. That leads to an attack that leaves Alexis reeling at Julian’s bitterness.

Of course, you can’t really blame Julian. He gave Alexis the shirt soaked in Carlos Rivera’s (Jeffrey Parise) blood and thought she would do as they agreed and burn it up like he did the hankie he used to clean the murder weapon. No such luck.

Not only did Alexis not burn it, but we saw that she told Diane Miller (Carolyn Hennesy) that she has hard evidence linking Julian to the crime. General Hospital spoilers ask if Alexis will slip up and say something? GH spoilers indicate that Julian will find the shirt that Alexis hid away and will know she lied to him and may be planning a betrayal.

Next week, after Julian discovers that Alexis hid the shirt away, he will confront her about it and will not be gentle at all. Even when Alexis was screaming at Julian about his crimes, he stayed loving and supportive.

However, this time, Julian will come down hard and things will get ugly. This will leave Alexis reeling and wonder if this is the “real” Julian and the loving man she married might just be the smiling public face of a violent monster. Alexis will be stunned at Julian’s verbal attack.

When Julian has a moment to reflect, though, he’ll realize he overstepped and needs to back track since he loves her and wants to be with Alexis still. After all, Alexis does know a lot about his dirty laundry and, in this case, that’s quite literal.

If Julian destroys the shirt, Alexis will be furious, but isn’t that what you would do if you were Julian? GH spoilers reveal that Julian will apologize to Alexis for exploding and try to get them back on track, but it may be too late.

Sonny Corinthos (Maurice Benard) will also come at Julian and make it clear that even though Lucas Jones (Ryan Carnes) suffered a horrible attack, he doesn’t feel sorry for Julian – there’s no dad-to-dad sympathy there and Sonny will also make more threats against Alexis which further stun her.

After her showdown with Julian plus Sonny’s intimidation tactics, Alexis will think carefully about her next move. This is not like being Julian’s lawyer and protecting him using the law as a tool. This is Julian putting her in a position where she’s personally breaking the law.

Julian has made Alexis an accessory to his crimes. He might think that’s a solid way to ensure she stays in lock-step with him, but it may be the worst thing because Alexis doesn’t want to be a criminal herself even though she routinely defends them.

General Hospital spoilers for this storyline reveal that what Alexis decides could have both personal and professional consequences. If Alexis keeps Julian’s dirty laundry hidden, she’s violating her professional ethics. But if Alexis rats out her hubby to the PCPD, she’ll have a clean conscience and an empty bed.

What will Alexis do? She loved Julian when she married him but has he killed her affection with his recent crime spree? Julian sees what he’s done as actions necessary to preserve their life and love, but Alexis doesn’t buy that excuse – not any more.

What do you think GH fans? Will Alexis turn Julian in? Can she keep him from destroying the evidence? Is Julian destined for Pentonville thanks to his wife? Share your comments and check back with CDL often for more “General Hospital” spoilers and news.