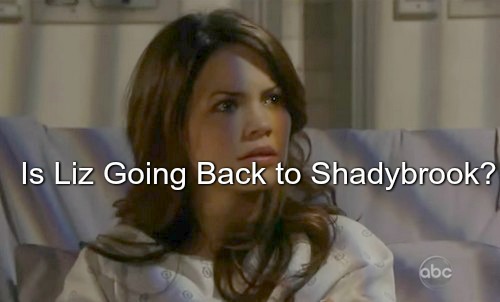 “General Hospital” (GH) spoilers reveal that Liz Webber (Rebecca Herbst) will soon do what fans have been clamoring to see for a year – she will finally admit all her wrongdoing – but to the most inappropriate of people – her ailing son little Jake Spencer (James Nigbor).

Liz is convinced that Jake’s injuries are her punishment for her lies – and once Sam Morgan (Kelly Monaco) is admitted to GH for her grievous injuries, Liz will finally see that this all comes down to the bad choices she’s made.

Despite the fact that Jake just had surgery and still has more medical complications to work through, Liz will confess to her son that she is the sole reason that Jason Morgan (Billy Miller) left them all. Liz will make it plain to Jake that Sam is not to blame.

Dr Kevin Collins (Jon Lindstrom) expressed concern about Liz’s state of mind when she first brought Jake to GH for therapy. This was a quick way to remind us – and alert fans that began watching GH more recently – that Liz has a history of mental problems.

She had a full-on mental breakdown when she was pregnant with Aiden Spencer and spent some time at Shadybrook in 2010. Then after little Jake “died” back in 2011, she had a string of nervous breakdowns.
Liz is prime to collapse again.

Franco (Roger Howarth) is helping her and encouraging her, but one former serial killer as your new BFF is not enough to hold her together. Liz will tell Jake what she’s done and will also see Jason sit at the bedside of an ailing Sam.

GH spoilers indicate this is a major turning point for Liz – away from her deceitful ways and trying to hang on to Jason at any cost – but is the turning point for the better or to the mentally unstable? We know that Jake is headed to Shriner’s Hospital for Children soon.

We also know that Liz will be at his side – but is she mentally fit to see Jake through this ordeal he must endure? Liz will soon take shelter with the other boys at Wyndemere since her house has been destroyed – which is a very symbolic outcome.

In a way, just as the house that Jason bought Liz is in ashes, so is any chance she had with Jason and all the lies she’s been telling herself for far too long. Will Liz be able to work through these issues, relying on Dr Collins, Franco and her few remaining friends?

Or is Liz destined for a padded room at Shadybrook? It might not be the worst thing for Liz to get some serious professional help… What do you think GH fans? Will Liz finally admitting the whole ugly truth about her actions push her over the edge mentally?

Share your thoughts below and come back to CDL often for more “General Hospital” spoilers and news.