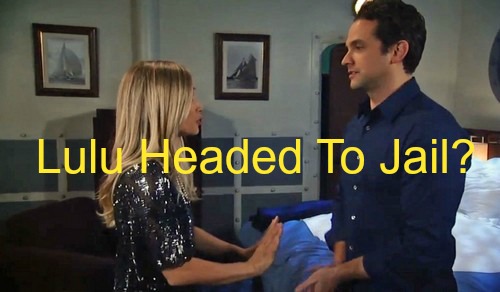 “General Hospital” (GH) spoilers reveal that Dante Falconeri (Dominic Zamprogna) will be furious when he finds out what Lulu Spencer (Emme Rylan) has done and how she put Valerie Spencer (Brytni Sarpi) at risk. Is Lulu facing hard time at Pentonville?

Johnny Zacchara (Brandon Barash) was laying out a slow revenge plot against Valerie – likely so he could spend the most time possible with Lulu. It looked like he was going to set up Valerie to look like she was taking a bribe from him, but that plot seems to have fallen by the wayside.

When Johnny heard the police radio alert that he was wanted, he flipped out. Johnny kept telling Lulu that he was on the down-low in Port Charles and it was cool. Now he finds out that it’s not cool – thanks to Maxie Jones (Kirsten Storms) confirming to Nathan West (Ryan Paevey) that she saw Johnny.

Johnny was over-confident that Maxie wouldn’t rat him out – but he was wrong. All his careful planning went out the window when he heard the BOLO – in a panic, he terrorized and kidnapped Valerie. GH spoilers show Valerie tied to a chair in a run-down cabin.

Johnny will be pacing and freaking trying to figure out what to do and will scream at Valerie – looks like his ranting might expose Lulu’s involvement. Johnny will decide that his best-case scenario is to leave Valerie there and take off – possibly in her car.

Of course he leaves a candle burning because he’s a thoughtful kidnapper – and Johnny leaves Valerie tied up so she can’t follow him. When the blaze starts, Valerie will go into a panic – who wouldn’t? Will Val rescue herself or will someone else come to save her?

They’re pretty far out of town so someone happening upon Val seems random, but you never know. GH spoilers hint that Dante and Jordan Ashford (Vinessa Antoine) will work together to try and figure out what’s going on. Johnny wants to protect Lulu and doesn’t want her implicated in his actions.

But it may not be up to him. Someone left an envelope of photos of Lulu with Johnny at the PCPD that Dante finds. Here’s the conundrum. Does Dante turn those over to his boss to try and help with the manhunt for Johnny? Or does he keep them secret to try and protect Lulu?

Dante should at least show them to Nathan – and it may be Nathan that presses him to show the pics to their boss, no matter what. The deciding factor for Dante on whether to give the pics to Jordan or not may be his realization that Johnny must be the one that Lulu was with on New Year’s.

When Dante assumes she was sleeping with her fugitive ex, all bets could be off. Dante will interpret that as Lulu having no respect for him by taking up with a wanted mobster, plus it potentially puts Rocco at risk. This is on top of Lulu just denying Dante a visit with Rocco, so he’s tense.

GH spoilers reveal that Johnny will be caught by the PCPD and won’t want to rat out Lulu, but the actions he took with Valerie will make it obvious that there’s a Lulu connection. If Dante held back the photos before, he won’t once he finds out that Johnny nearly killed Valerie.

Johnny has no connection to Valerie – but Lulu hates Valerie – and Johnny loves Lulu. The math is obvious to anyone who knows Lulu’s history with both. That makes Lulu not just an innocent bystander that ran into Johnny – it makes her an accomplice to attempted murder.

Could we see Lulu in an orange jumpsuit facing criminal charges? Johnny may try and say he randomly targeted Valerie, but that’s not plausible. Will Lulu try and turn this around on Dante and say it’s his fault for sleeping with Valerie?

The bottom line is, Lulu doesn’t have a leg to stand on and may just need to get a good lawyer. Johnny did want to have Lulu all to himself – maybe they can share yard time at Pentonville and stare at each other through the barbed wire…

It looks like the only person who could salvage this for Lulu is Valerie. If Valerie says Johnny never mentioned Lulu and adopts his theory of her being a random victim, Lulu could get off with a slap on the wrist. Would Valerie do this for her cousin? She might.

Valerie is a better and kinder person than Lulu ever gave her credit for. You’ll recall that Lulu was a real jerk to Val when Valerie was grieving the loss of her mother. Of course, Val did try to kill Luke. But Luke terrorized Valerie and put her chronically ill mother at risk – and then she died – so he was asking for it.

Valerie was right to be angry at Luke and Lulu showed her cousin zero compassion even though Dante encouraged her to time and again. If Lulu had been decent to her and shown her some familial love when Valerie lost her mom, they might not be in this mess right now.

Will Valerie offer an olive branch and get Lulu out of her legal troubles? What do you think GH fans? Should Lulu go down for conspiring with Johnny or do you want to see Valerie get her cousin out of the hot mess she’s in? Share your comments below.

Come back to CDL often for more “General Hospital” spoilers, news and updates.