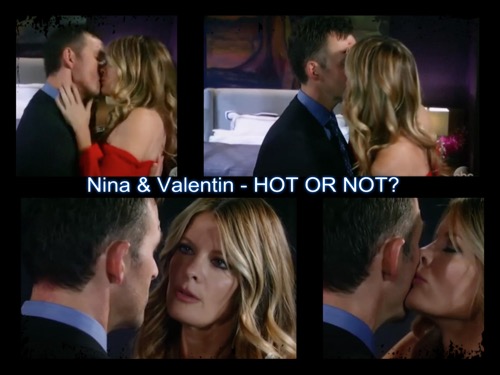 General Hospital (GH) spoilers look at an unexpected pairing with immediate spark and decide what the future may hold for this surprise Genoa City couple. Watching General Hospital’s Nina Reeves (Michelle Stafford) devastation over Franco Baldwin (Roger Howarth) leaving her because she wanted a child and he didn’t, was heartbreaking.

Nina watching Franco starting a relationship with Elizabeth Webber (Rebecca Herbst) was devastating. How could Franco tell Nina he didn’t want any children and then date a woman who has three little boys?

With Franco on her mind, she was visibly upset and unable to keep it together. She dropped her room keycard, and when she bent down to get it, a handsome stranger approached her. As the camera zooms in on his face, we realize that it is actually Valentin Cassadine (James Patrick Stuart).

Nina engaged in a conversation with him about how much she loved Franco but doesn’t want to bore the stranger. Valentin makes her swoon by telling her that if he were to describe her, he would not use the word “boring”.

Nina opened the door to her room and Valentin came inside, the chemistry between these two was undeniable. He noticed that she had a Crimson magazine on her coffee table and she told him that she is the Editor in Chief, and somehow ended up informing him that Dillon Quartermaine (Robert Palmer Watkins) was her staff photographer.

Valentin seems thoroughly interested in the magazine and told Nina he read the magazine when he was young and living a poor life, and that he wanted to become one of those powerful men she writes about in her magazine.

Nina even divulged that she was in the midst of doing an article on Nikolas Cassadine, but he had recently passed away. Valentin tells her that he is very much aware of Nikolas’s demise. Of course General Hospital spoilers have let us know that Nikolas is not dead and will be returning to GH to reprise his role.

When Valentin becomes too inquisitive, Nina asks him what his name is and he says “Theo Hart”, and she claimed to know what he was up to. Valentin told Nina he was merely making conversation so she didn’t have to think about her ex anymore. The tension between the two hit a boiling point and they ended up in bed together.

What do you think CDL fans, are Nina and Valentin hot or not, will they be the next GH super couple? Remember to check CDL often for more General Hospital breaking news, spoilers, and upsates!