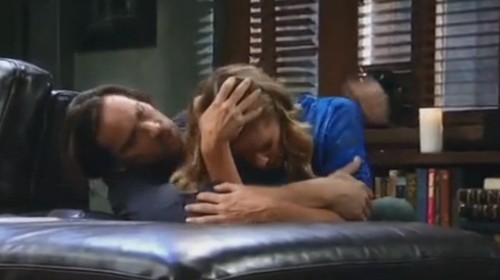 “General Hospital” (GH) spoilers tease that Nina Clay’s (Michelle Stafford) seduction she has planned for Franco (Roger Howarth) will take a bad turn and they could be making accusations instead of making love. What is it that sets off this major relationship showdown? Read on!

Once Nina hears that she can’t carry a child, it’s game over. She tried the adoption route, but being a former mental patient and confirmed baby kidnapper apparently don’t look too good on a potential parent profile.

General Hospital spoilers tease that Nina was so excited about getting preggers that she is not clearly seeing Franco’s trepidation. When she mentioned having a biological child, he said “maybe” but then Franco burst into her doctor’s appointment to try and drag her out of the stirrups.

Franco has no clue she stayed for testing. When Franco comes home, he’ll see a lingerie clad Nina and will be excited and ready to get intimate with his sweetie. But once she whispers in his ear that they’re not just making love, but are trying to make a baby, things will go frigid.

He does NOT want his damaged deranged DNA passed on to a child and Franco will shut that down immediately. GH spoilers remind us that While Nina is right that he’s fond of Jake Spencer (James Nigbor) and Kiki Jerome (Hayley Erin), neither is his biological child.

Franco was birthed by one lunatic and raised by another and then went on to do great harm in the world. No way will he allow himself to have a biological child that might wreak the same level of havoc. And we know Franco was bad from the get-go.

He’s not just a guy who snapped and started killing people – Franco revealed when he assessed Jake’s disturbing drawings that he was also a dangerous doodler as a child. Nina blames it all on the tumor, but Franco is not so sure that he’s not genetically bad to the bone.

GH spoilers warn that Nina will be crushed when she gets the news she is infertile. Franco does his best to comfort the crushed Nina.

Will Franco and Nina split over this? Both sides may consider walking away. GH spoilers tease that Nina may soon go a little nuts again and it’s likely over this baby mama drama.

What do you think GH fans, do Nina and Franco stand any chance of surviving her baby making disappointment? Could there be a surprise in store – does Nina already have a child?