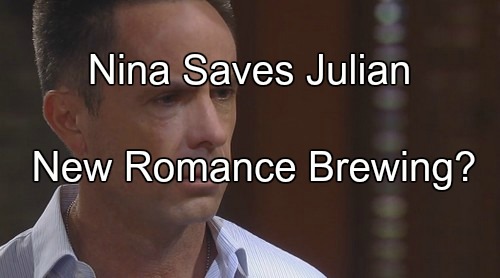 “General Hospital” (GH) spoilers tease that Julian Jerome (William deVry) may not be single for very long – and may even have overlapping romances as a new interest kicks off while things are falling apart with his wife. Is Nina Clay (Michelle Stafford) the next Mrs Jerome?

Alexis Davis (Nancy L Grahn) is now certain that not only did Julian slay Carlos Rivera (Jeffrey V Parise) but that he used her deadly Cassadine dagger to do the deed. GH spoilers tease that Alexis may be arrested since her prints are on the murder weapon but first there’s drama at home.

Alexis demands the truth from Julian once and for all and by the look on her devastated face, Julian will admit to killing Carlos – and may even spill the beans that he’s been lying for a year about ordering Duke Lavery’s (Ian Buchanan) death as well.

General Hospital spoilers say Julian loves Alexis but he can’t deal with all this drama and, at the end of the day, he tried to change who he is and can’t. Julian had to step back into the mob to protect Ava Jerome (Maura West) but it was like putting back on a second-skin and he’s comfortable there.

Spoilers tease that Alexis will throw Julian out of the house as their argument reaches the inevitable conclusion that he’s done very bad things and lied to her about it. The good thing about Julian is, he’s a survivor, and will compartmentalize so he can move forward.

The first thing Julian needs to do is to shore up his alibi and that means a talk with Nina. We’ve already seen some chemistry between the two – GH showrunners were obviously setting the stage for a rebound with Nina and Julian consoling one another.

But first, Julian has to make sure that Nina will cover for her but will she agree readily or will Julian have to make some promises – or sweet talk her a little – to make it happen? Julian knows that more than anything, Nina wants a child.

Will Julian promise to help make that happen or romance her while she’s vulnerable to get what he wants? There’s no doubt that Julian can bend Nina to his will – and she’ll likely bend easily because Nina doesn’t have a lot of respect for the law anyway.

If Franco (Roger Howarth) being a serial killer wasn’t an issue, why would Julian being a mobster be a problem? The answer – it wouldn’t be. Julian may initially use Nina to get an alibi to keep him out of jail, but things may heat up from there once he knows Alexis is done with him for good.

What do you think GH fans? Are people already shipping Nina and Julian? Is Julexis dead and done thanks to Julian’s actions? General Hospital spoilers also hint that a mysterious new man will console Alexis. Hmm… Looks like both of them will move on faster than we could have imagined.

Share your comments below on the coming split of Julian and Alexis and the possible new romance between Nina and Julian. And be sure to check back with CDL every day for more “General Hospital” spoilers and news.