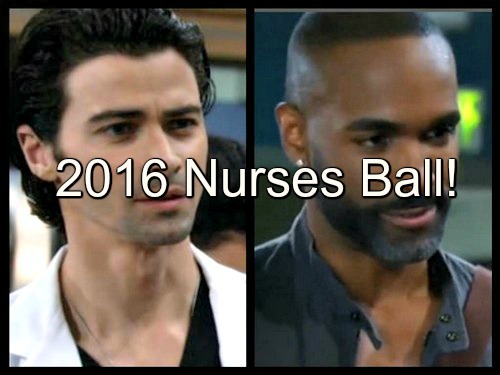 “General Hospital” (GH) spoilers for the 2016 Nurses Ball reveal three episode dates are set for May 24-26, Tuesday through Thursday – and an expanded budget compared to last year. Here’s a look at what we know is coming – and what we hope GH showrunners will include!

It’s hard to imagine how the drama can match last year’s debacle with Ric Lansing (Rock Hearst) proposing to Liz Webber (Rebecca Herbst) and then Carly Corinthos (Laura Wright) publicly humiliating him. No doubt Ric will be MIA this year – as he has been for months.

Aveeno is sponsoring again and the event is, as usual, dedicated to raising funds and awareness about HIV/AIDS. One thing is clear – Dr Griffin Munro (Matt Cohen) must have a major role in this year’s festivities for a couple or reasons.

First, Griffin talked to Sonny Corinthos (Maurice Benard) when he first came to town about losing someone to HIV. Second, Matt Cohen is a dynamite singer known for doing karaoke at Supernatural conventions (he played two parts on The CW show).

We’ve got fingers crossed that Dr Munro will stretch his singing chops and do a number on the Nurse’s Ball stage. And we have to say, although Griffin seems shy, we’d be thrilled if he stripped down for part of the Magic Milo number.

But Griffin aside, it’s Curtis Ashford (Donnell Turner) that we’re most hoping to see strutting his stuff in his skivvies at the Nurse’s Ball. That man is on fire! We hope Dr Liesl Obrecht (Kathleen Gati) will do another show stopping self-centric number – and we can’t wait to see it.

Lucas Jones (Ryan Carnes) and Brad Cooper (Parry Shen) have set the date for a May wedding – a year after their Nurse’s Ball proposal – could the two events coincide? Here’s what else is on our wish list for the 2016 Nurse’s Ball.

#1 Hamilton Finn (Michael Easton) in a dapper suit with Roxie as his date. Do they may formal gowns for service lizards?

#2 Ava Jerome (Maura West) and Scotty Baldwin (Kin Shriner) together – maybe he’ll convince her to keep him around that long. #sugarmama

Whatever they have planned for the Nurse’s Ball, I’m sure it will be spectacular as usual. GH showrunners have promised cameos from ABC news reporters and morning talk staff on the Port Charles red carpet and Frank Valentini pledged, “plenty of music, dance, glamour and, of course, an abundance of drama!”

Some of the official General Hospital spoilers for the Nurse’s Ball released by ABC include:

A popular resident whose life hangs in the balance… Hmm. Who could that be? A surprising arrest. Could that be Julian Jerome (William deVry) for Duke’s killing? A new couple. We’ve heard whispers that Maxie Jones (Kirsten Storms) and Griffin may hook up!

What do you think GH fans? Are you excited for the Nurse’s Ball 2016? Who do you hope to see take the stage this year? Share your comments below and come back to CDL often for more “General Hospital” spoilers and news!