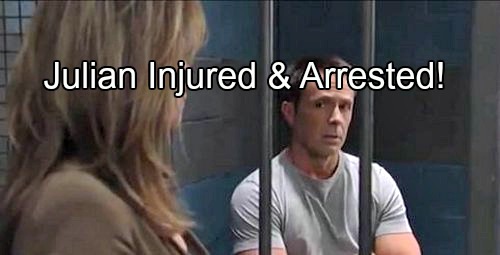 General Hospital (GH) spoilers tease that Julian Jerome (William deVry) is going down in a big way thanks to the betrayal of Alexis Davis (Nancy Grahn) and he’ll wind up in the hospital and then jail awaiting trial. Here’s what to expect.

Now that Alexis got Julian to confess while she was wearing the wire, Jordan Ashford (Vinessa Antoine) is off and running to get a warrant, but things will get tense in the Jerome house before she and the PCPD cops can get back there.

Julian begins to get suspicious of Alexis because although she said she wanted to work things out with him, she flinched when he tried to touch her. That’s what initially will raise Julian’s suspicion and alerts Anna Devane (Finola Hughes) that Alexis may be in danger. 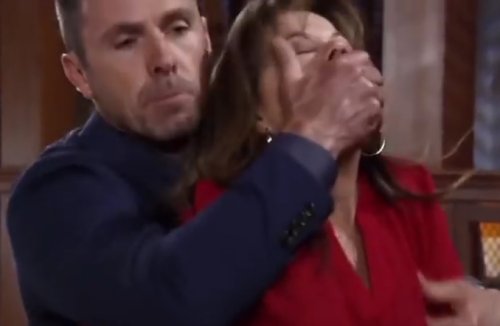 Anna is with Paul Hornsby (Richard Burgi), out in the van monitoring Alexis on the wire, and they hear Julian begin to get upset with Alexis. When his wife tries to buy time, Julian becomes ever more suspicious and will come at Alexis.

General Hospital spoilers tease that Julian will discover that Alexis was wearing a wire and things go downhill from there. Alexis and Julian end up in a nasty confrontation over the depth of her betrayal. Of course, Alexis feels equally betrayed.

Alexis will know that there are cops listening to her, but she’s not certain how close they are or if they can get to her in time. Things will escalate between Alexis and Julian and Alexis is scared. With Julian facing life in prison, he may snap, particularly if Alexis also admits the baby lie.

General Hospital spoilers reveal that as things escalate to what could be a dangerous confrontation, the PCPD will be there to arrest Julian. If they’re lucky, the cops will also be able to recover the murder weapon that Julian had his henchman Hammer (Paul Parducci) steal.

But don’t expect Julian to go quietly! GH spoilers tease that when the PCPD move in to take down Julian, tensions will heighten. The PCPD head in under the assumption that Alexis is in danger and as they swoop in to “save” Alexis, Julian will be hurt.

GH spoilers indicate that Julian is injured seriously enough to wind up at GH. Once arrested, Julian will ponder whether he should try and escape from Port Charles to evade justice. Once Julian is behind bars, Anna will leave town to visit family with plans to return in time for his trial. 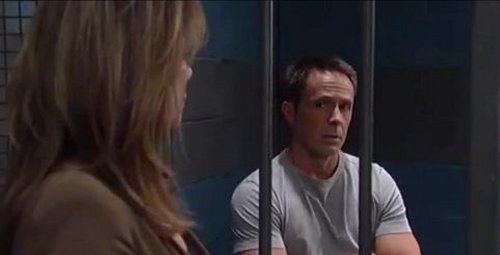 However, if Julian escapes or can slither his way out of the charges, there may be no trial at all. Sonny Corinthos (Maurice Benard) remains uncertain that the PCPD will bring Julian to justice, but this arrest is a step in the right direction.

What do you think GH fans? Are you thrilled that Julian will finally be arrested for the killing of both Duke and Carlos? Share your comments below on these Julexis spoilers and check back with CDL often for all the latest General Hospital spoilers and news.