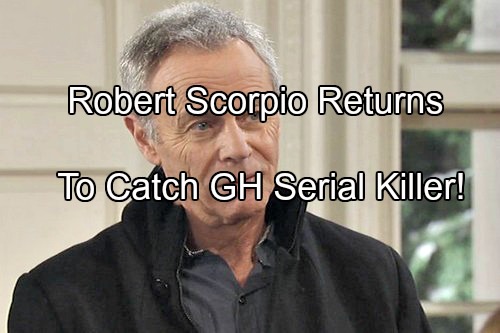 General Hospital (GH) Spoilers notes that the dashing and debonair Robert Scorpio (Tristan Rogers) will be returning to the General Hospital canvas. He is slated to be onscreen beginning August 26. Always a fan favorite, GH viewers will be thrilled to have Robert back if even for a short period. Of course rumors are flying and everyone is wondering what brings him back this time around.

In an interview with Soaps In Depth while saying he wasn’t sure how much he could reveal, he did drop a huge hint that did not go unnoticed by General Hospital Spoilers. He said that he will be involved in three distinct stories.

Given his long history with General Hospital, there are many stories and characters to choose from. One of the most obvious would be something to do with Anna Devane (Finola Hughes) which may be related to the whole Julian Jerome debacle. Will Julian succeed with one of his escape plans? Robert would definitely help track him down to help spare Anna any more heartache.

Another possibility could be the GH serial killer storyline. Rumors have been coming strong that the killer may very well be Dr. Andre Maddox (Anthony Montgomery). The WSB may well have sent Robert in to investigate. You may remember that Robert was affiliated with Andre through the WSB. During his last visit to GH, Robert vouched for Andre with Anna once he disclosed to her that they knew each other.

While General Hospital spoilers have teased Luke Spencer (Anthony Geary) may be returning, this is another possible storyline for Robert to be involved in. Robert and Luke have history all the way back to the 80’s and are like brothers. There’s a definite possibility with all of the talk onscreen of Luke and his whereabouts that Robert will jump in and help make sure his old buddy is alive and well.

Another alternative could be the mystery kidney that Josslyn Jacks (Eden McCoy) received. With Jake Spencer (Hudson West) alive and both kidneys intact, the question has been where did it actually come from? While General Hospital fans are on the fence as to whether Nell Hayes (Chloe Lanier) is the actual donor, there is still the mystery as to how exactly it got to Josslyn.

Perhaps her dad Jasper Jax (Ingo Rademacher) bought it, perhaps his evil brother Jerry Jacks (Sebastian Roche) secured it for her. Whatever the case may be, there will surely be an investigation and Robert could be back on GH to unravel it all.

Whichever storylines we find him embroiled in, it’s a sure bet that not many people will object to hearing his smooth Australian accent grace Port Charles once again!

Share below why you think Robert Scorpio is returning and who he’ll be involved with and remember to come back to CDL for all your General Hospital spoilers, news and updates!