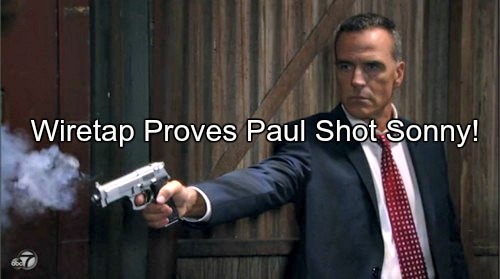 “General Hospital” (GH) spoilers reveal that Sonny Corinthos (Maurice Benard) will hit pay dirt on this week’s episodes with the wiretap he sets up on DA Paul Hornsby’s (Richard Burgi) phones. Sonny is looking for info to help find Carlos Rivera (Jeffrey Vincent Parise) but will shocked by what he learns about the dirty DA.

The most stunning piece of news that Sonny could learn from bugging Paul’s phones is that it was Paul and NOT Carlos that shot him. Right now, General Hospital spoilers know that Sonny isn’t really intent on revenge for his shooting – he promised Anna Devane (Finola Hughes) that they would get justice for Duke Lavery (Ian Buchanan).

That means letting Carlos, whom Sonny assumes shot him, continue breathing until he testifies and crucifies Julian Jerome (William deVry) for ordering the hit on Duke. Sure Dr Griffin Munro (Matt Cohen) has been preaching forgiveness, but Anna and Sonny are NOT ready to give Julian a pass.

Carlos shooting Sonny is almost secondary to this mission but it could certainly come up in conversation between Carlos and Paul. On Thursday’s episode of GH , Sonny will call in Brick, a surveillance expert for the mob. Brick is a cameo role by ESPN’s Stephen A Smith who also happens to be a GH super-fan.

Brick will bug not only Paul’s office lines at the Port Charles government building but Sonny will distract Paul so that Brick can get hold of his cell phone and tap that as well. The end result is that Sonny has ears on all of Paul’s conversations.

Paul has been trying to get Carlos to come back to Port Chuck to implicate Julian in Duke’s shooting and tie up some other loose ends that could make Paul look bad. Carlos, however, is certain that Sonny will take him out the moment he sets foot in town.

GH spoilers tease that the important info to be gleaned from snooping on Paul’s conversations with Carlos is that he’s been lying to Anna about being in contact with Carlos – and they can see that Paul and Carlos clearly have a relationship beyond that of a DA and a witness in a criminal case.

Will Carlos mention that Sonny is gunning for him over Duke and Sonny’s shootings then tell Paul he won’t go down for shooting Sonny since Paul was the trigger man? And, importantly, will Carlos give away his exact location so that Sonny can send some mob associates to scoop him up?

Will Paul be able to convince Carlos to return but Sonny hears all the details so he can lay a trap for both of them? The outcome of this will not be good for Paul. Sonny was taken aback when Paul approached him at GH not long after his shooting to tell him he was going to put him away.

After the digital eavesdropping, Sonny will realize that Paul has been gunning for him quite literally – and that’s something he won’t let rest. But what will Sonny do with this information? Will Sonny intercept Carlos? Will Sonny allow Carlos to testify against Julian and then go after both Carlos and Paul?

How much of what he overhears will Sonny share with Anna? Sonny isn’t a great team player and isn’t known for his self-control. Will he snap and try and take out Paul even though that could jeopardize the mission to get justice against Julian for ordering Duke’s death?

What do you think GH fans? Can Sonny control his temper when he finds out Paul is the one who put him in the wheelchair? Will Paul wind up dead? Or will he end up in Pentonville a couple of cells down from Julian?

Share your thoughts below on this exciting plot twist and what you hope Sonny does with the info he gleans from tapping the dirty DA’s phones. And be sure to come back to CDL every day for detailed “General Hospital” spoilers and news.