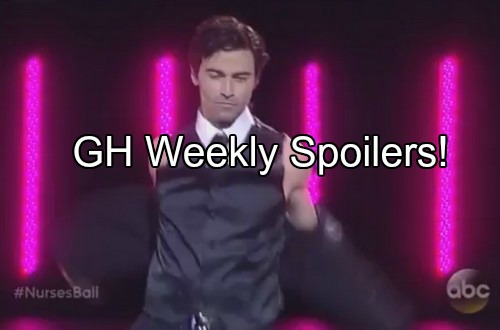 “General Hospital” (GH) spoilers tease that Dr Obrecht tries to hog the limelight on next week’s episodes during the week of Monday, May 23, through Friday, May 27, at the Nurse’s Ball while a life is in danger, a body is found, an arrest is made, and there’s surprising red carpet action. Check out what you’ll see next week on General Hospital.

Sabrina tells Michael what she’s been through and it’s not pretty. Sabrina should be happy to be reunited with her baby who’s safe and sound at the Q mansion with Tracy Quartermaine (Jane Elliot). Later in the week, Dillon Quartermaine (Robert P Watkins) finds out something about his mother.

Looks like Ava will push back and force her hand and things will come to an interesting conclusion with the custody battle. Nathan West (Ryan Paevey) is in no shape to attend the ball so Griffin Munro (Matt Cohen) walks the red carpet with Maxie Jones (Kirsten Storms).

Hayden Barnes (Rebecca Budig) reaches out to Finn Hamilton (Michael Easton) and Griffin has a gut feeling about the strange doc. Dr Liesl Obrecht (Kathleen Gati) still has her eye on Finn and warns Liz Webber (Rebecca Herbst) about the quirky doctor.

Liz issues a warning to Nikolas Cassadine (Tyler Christopher) about his increasingly volatile relationship with Hayden and an action he’s considering that could come back to bite him. Nikolas and Jason Morgan (Billy Miller) get into a showdown on the red carpet.

Alexis Davis (Nancy L Grahn) and Julian Jerome (William deVry) get off to a bad start next week – things are tense because she’s angry at his recent homicidal actions and she’s wondering what to do with that bloody shirt she kept – that he doesn’t know she hid away.

Alexis makes a decision about her husband and then a phone call – but to whom? Julian hears from Lucas Jones (Ryan Carnes) about his wedding plans with Brad Cooper (Parry Shen). Lucas makes a remark that sets Julian and Alexis on edge. Brad has a question for Felix DuBois (Marc Samuel).

The red carpet has real-life reporters Abbie Boudreau from Good Morning America and George Pennachio from KABC. Liz finds out someone plans to do her dirty at the ball and embarrass her publicly but it looks like Franco (Roger Howarth) will step up.

Obrecht plots sabotage of the Nurse’s Ball and we wonder if she has another show-stopping number planned along with her trouble making. Emma Drake (Brooklyn Silzer) performs with Ned Ashton (Wally Kurth) and Curtis Ashford (Donnell Turner) strips down with the Magic Wands.

We’ll also get a look at the guns on Griffin because he’s dancing too. On a more serious note, Robin Scorpio (Kimberly McCullough) makes a powerful speech about HIV/AIDS and reminds everyone why the Nurse’s Ball is so important.

Lucy Coe (Lynn Herring) is not only emceeing the ball, as usual, but is set to serve as the officiant of the wedding. But before Brad and Lucas can start their ceremony, Lucas gets a call from GH and has to head to the hospital to deal with an emergency.

He leaves a message for Brad and then takes off. Looks like on the way back from GH, Lucas runs into someone looking for trouble and he may be in danger. A body is found, but no word yet if it’s Lucas or someone else. An arrest is made by Jordan Ashford (Vinessa Antoine).

Hayden offers Jordan some info on the sly, so could that be what leads to the arrest? Does Hayden rat out her hubby for something or is it Julian that’s handcuffed? Diane Miller (Carolyn Hennesy) is back to offer advice to someone, but who? Perhaps Alexis…

Carly finds out something about Ava Jerome (Maura West) and uses the info to threaten Ava into leaving baby Avery with her and Sonny. Ava won’t cooperate and later in the week, Ava has a warning for Paul Hornsby (Richard Burgi). Paul and Ava play games but who will win?

Curtis saves the day for someone and on the night of the Nurse’s Ball, Jason and Sam Morgan (Kelly Monaco) find something that sets them on an adventure. On Friday, we’ll see another cameo by Ian Buchanan as ghost Duke to help Anna Devane (Finola Hughes) move on.

All this and more in a jammed pack May sweeps week from Monday May 23 thru Friday May 27. Watch then come back to CDL every day for detailed “General Hospital” spoilers plus news and more.