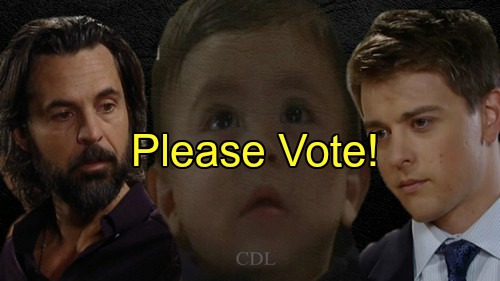 “General Hospital” (GH) spoilers revealed that Teresa Castillo is off maternity leave and Sabrina Santiago has her return air-date on this week’s episode, Friday, May 20. With that time quickly approaching, it seems certain that she is the momma of the sweet baby boy that showed up on the doorsteps of the Qs.

Could it be that Sabrina wants Michael (Chad Duell) to have time to bond with the baby, maybe his baby, before she steps in to explain herself? We offer a poll below so viewers can vote as to who they think Sabrina’s baby is – Michael or Carlos.

GH fans watched in late 2015 as writers jammed an elaborate explanation as to the father of Sabrina’s baby down their throats. Supposedly, after a one-night stand with Carlos Rivera (Jeffrey Vincent Parise), Sabrina becomes pregnant. Sabrina doesn’t mention the pregnancy, or the one-night stand for that matter for months until boom – she’s passing the baby off as Michael’s… no Carlos’s… wait…WHO EVEN KNOWS?

With the impromptu arrival of the mystery baby, the debate over how the baby could possibly be Carlos’s is sure to be revived. This time, however, fans have one other big question: why was the excitement in Carlos’s face suddenly replaced with a grim expression as soon as he delivered the baby?

The only proof that the baby is not Michael’s was Sabrina’s out-of-the-blue confession she slept with Carlos and an ultrasound that showed a large baby. There are many reasons a fetus can appear older than expected in an ultrasound including gestational diabetes, simple error, or a downright lie.

Sabrina’s state of mind surrounding the pregnancy is also certainly up for debate. If you consider everything that happened when her son Gabriel died and the events surrounding this pregnancy, maybe Sabrina felt that her baby was at risk if she revealed Michael as the true father.

It would be easy for fans to believe Sabrina created a mess she did not intend to when she pointed to Carlos as the father.

Sabrina’s baby making its way to Michael, directly after Carlos’s death, opens the door to begin revealing the truth behind Baby Santiago’s paternity.

What do you think, will Sabrina’s child end up truly being a Quartermaine or a Rivera – is Sabrina just trying to wiggle her way back into Michael’s good graces? Vote in our poll below and come back to CDL often for more “General Hospital” spoilers and news.