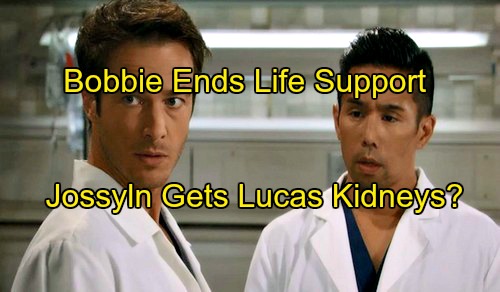 “General Hospital” (GH) spoilers hint that Lucas Jones (Ryan Carnes) may be grievously wounded in the culmination of May sweeps action on next week’s episodes and die. Could this tie into the Josslyn Jacks (Eden McCoy) kidney mystery? Remember Josslyn has not been feeling well…

Dr Hamilton Finn (Michael Easton) has been treating her and diagnosed her with Fifths Disease, a common and not fatal illness. However, when Josslyn didn’t improve, Finn ran additional tests. Those results are not back yet, but should be soon.

Carly Corinthos (Laura Wright) is busy investigating the source of the kidneys donated to Josslyn since she knows it’s not Jake Spencer (Hudson West). Carly stole the duty logs to see who was working that day but General Hospital spoilers say it looks like she hasn’t dug to deeply into it yet.

The source of the kidneys may or may not matter soon, though, because GH spoilers indicate Josslyn is sick and may need another set of kidneys soon to save her life. Will Lucas’ impending death turn into an opportunity to save her?

Will this be a case of history repeating itself? Will another Spencer tragedy once again save Josslyn’s life? And if Josslyn’s kidneys need replaced again, is it because there was something wrong with the original ones she received? Or is it a return of the cancer?

GH spoilers hint that Carly will find out where Josslyn’s transplanted kidneys came from, and the truth will be shocking. Was someone killed for them? Were they black market? Were the kidneys that Josslyn got healthy or were they tainted from the start?

It looks like Lucas will linger, perhaps in a coma, but then Bobbie Spencer (Jacklyn Zeman) gets the news that he’s irretrievable and too much damage was done for him to survive. Bobbie and Carly will commiserate over the decision to take Lucas off life support.

Will Lucas be a match to donate kidneys to Josslyn to save her life? Will Josslyn benefit from someone’s death once again? Will this ordeal bring Finn and Carly closer even as Sonny Corinthos (Maurice Benard) and Carly are struggling because of his continued use of violence?

Can Josslyn’s life be saved even as Lucas’ is lost? What do you think GH fans? Will Lucas death have meaning because it allows him to save another life? Share your comments below and come back to CDL for more “General Hospital” spoilers and news.