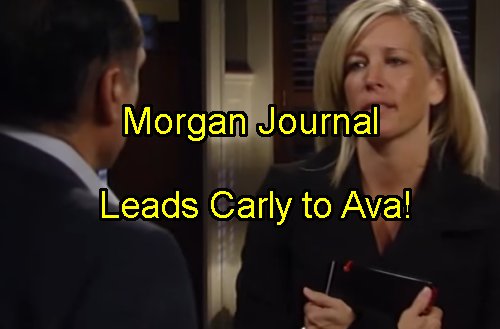 A new General Hospital (GH) spoilers video shows Carly Corinthos (Laura Wright) finds the suicide note that Sonny Corinthos (Maurice Benard) left for her and will confront him when she comes to talk to him about the journal of Morgan Corinthos (Bryan Craig).

When Carly brings the journal to Sonny’s house, they bicker over what the journal means. Carly says the check marks that Morgan added to his journal entries show he was taking his medications. Sonny is skeptical and says that he might have been covering for not taking them.

Carly will remind Sonny that the journal was private and Morgan said he wasn’t going to show what he wrote to anyone, so she asks why would he be lying to himself about taking his meds. Carly keeps pushing until Sonny goes to check Morgan’s medications upstairs. 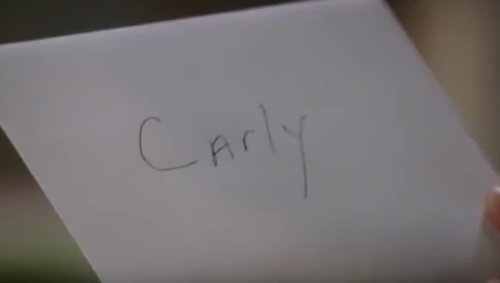 This leaves Carly alone and she discovers the sealed envelope with her name on it. She demands to know what this is. GH fans only got a glimpse of the note while Sonny was writing it, but it’s clearly a goodbye. The note was addressed to her but talked about all the children and his blame.

Sonny wrote in the note that he didn’t want to put them at risk and they’d be better without him. We can expect Sonny to fib about the note and try and get it back from her without Carly opening it. The good thing for him is that she’s very distracted about this journal and will let it go.

Sonny retrieves one bottle of pills, but we know that Morgan took more than one kind of medication. He explained to Nelle Hayes (Chloe Lanier) at the Floating Rib before he died what each pill did for his bipolar condition. Ava Jerome (Maura West) tampered with just one – his lithium. 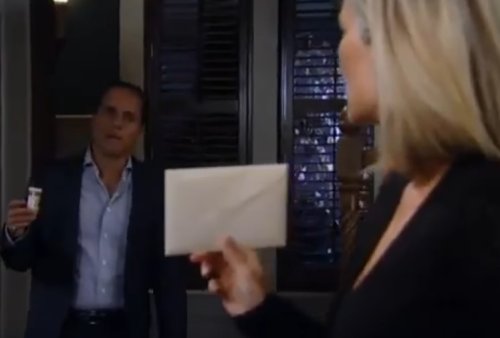 But Ava also snatched that bottle out of the room the last time she was at Sonny’s house. Carly remains convinced the medication was at fault and even theorized something may have happened to his meds. Her next stop is Andre Maddox with that pill bottle to talk about the prescription regimen.

It should be Andre that lets Carly know there’s a bottle of pills missing. From there, they’ll look for them but the bottle isn’t anywhere. Sonny might see this as a sign that Morgan stopped taking the lithium and threw them out, but Carly wants to believe the best of her son.

If Morgan wasn’t at fault, then she can put all the blame on Sonny. Nelle could help Carly’s investigation by revealing that Ava was grabbing something from Morgan’s room. The pills that could sink Ava seem to be in the hands of Lucy Coe (Lynn Herring). 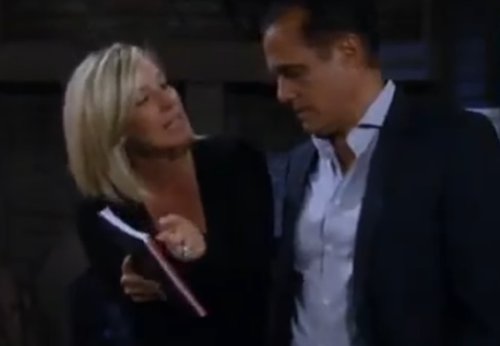 Lucy meets up with Ava on the upcoming episode to make her demands known. If Lucy turned that bottle over to Carly, Ava would be toast. Whatever Lucy wants, Ava will have to give her, but the net is still closing in around her as Carly investigates.

How long until Ava answers for her crimes and will it be in time to save Sonny’s life? Carly will get other tips this week that Sonny is on the brink, but she’s distracted by this investigation plus Morgan’s funeral so she will disregard the red flags about Sonny’s intentions.

Jason’s caught in the middle of a shoot out! @GeneralHospital #billymiller #GH

What do you think GH fans? How long until Carly figures out Ava destroyed her son and what will she do then? Share your comments below and check back with CDL often for the latest General Hospital spoilers and news.