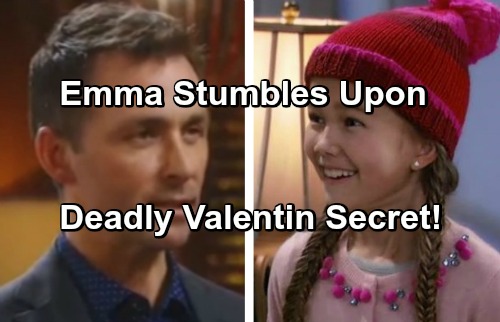 General Hospital spoilers warn that adorable Emma has come major danger in store when she returns to Port Charles for the holidays! On General Hospital it seems that Valentine Cassadine’s (James Patrick Stuart) tentacles are sliming someone new with every passing day. While Anna Devane (Finola Hughes) is in hot pursuit of his identity, it looks like a precocious member of her family is about to become collateral damage. Will she be able to uncover his secret past before danger hits someone she loves?

Anna’s seldom seen granddaughter Emma Drake (Brooklyn Rae Silzer) is on a holiday visit (and stealing every scene she’s in!). The adorable young lady has clearly inherited her grandmother’s penchant for solving mysteries, but does she also have Anna’s instincts? 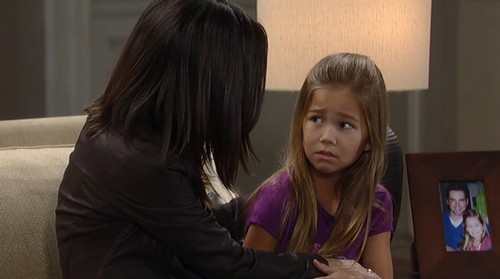 Clever Emma has noticed how riled up Anna gets whenever Valentin is around. Anna initially fended off her probing questions, but finally confessed that she would like to know more about the mysterious stranger.

Adorable Emma then offered to spy for her when she has play dates with Valentine’s daughter, Charlotte (Scarlett Fernandez). How cute is that, a chip off the old block and she’s not even driving yet!

Bemused Anna told her absolutely not, no spying for you, young lady! But when Emma blurted out, “grandma, you’re a spy!” what could Anna say? She relented and said that Emma was allowed to just keep her eyes and ears open for anything amiss, and report back to her. 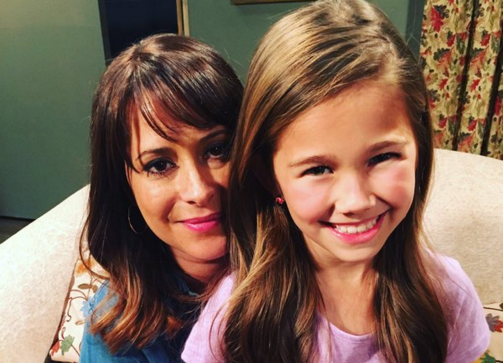 But according to some wild General Hospital spoilers, Emma is going to get up to much more than mere observation the next time she visits Charlotte at Spoon Island! Sweet Emma believes that she’s helping, not defying, Anna when she ditches Charlotte and goes off alone in search of clues. Uh-oh, nothing good ever happens at Wyndemere!

General Hospital spoilers reveal that Robin Scorpio Drake (Kimberly McCullough) will join the clan for holiday festivities in Port Charles, but that her stay runs beyond the holiday. Could it be that danger, not fun, is the reason behind her extended stopover?

If the GH spoilers hold true, Anna and Robin will need to kick into superhero mode in order to rescue Emma from a perilous situation. But will their quest result in a shocking discovery about Valentin’s true identity?

Sam (Kelly Monaco) and Jason Morgan (Billy Miller) will get an unexpected visit from Robin while she’s in town; will they be enlisted in the search to save Emma before it’s too late? Stay tuned, GH fans, the who-is-Valentin mystery is about to take a very surprising turn! Come back to CDL for all your General Hospital spoilers and news!