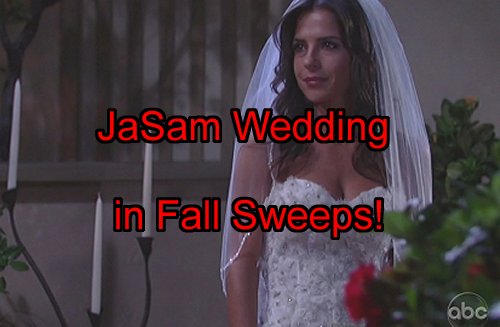 If you check out the pic details, you can see that Jason and Sam are skipping Noddle Buddha this go-round and will have their nuptials at the home of Sonny Corinthos (Maurice Benard) and Carly Corinthos (Laura Wright).

If you do a breakdown on the photo leaked by Valentini, you’ll notice a few details. Jason has on his wedding ring! Michael Quartermaine (Chad Duell) is on hand and you can see Kristina Corinthos (Lexi Ainsworth) in the background as well. 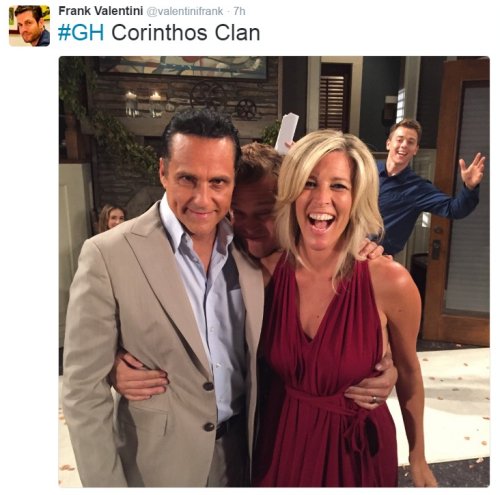 Behind Carly and Sonny, who in a big Jason squeeze – you can see a white carpet leading outside sprinkled with pink rose petals. That tells us that Jason and Sam will say “I do” outside on the patio underneath the stars.

There’s no hint of Sam’s dress or Jason’s suit since you can’t see either of their outfits, but since this looks like a more traditional wedding set-up, don’t expect black t-shirts and jeans this time. Looks like they’re going for full-blown romance.

Since there’s a baby cooking in Sam’s oven, they need to get hitched ASAP before the baby bump intrudes in their ceremony. We’re also wondering whether Liz Webber (Rebecca Herbst) will be on hand for the wedding along with Jake Webber (Hudson West).

And if Liz is coming to the wedding, will Franco (Roger Howarth) be her date? General Hospital spoilers hint that Sam will push Jason to leave Liz alone about her love life – even if she’s dating Franco. Before long, this may be one offbeat blended family… 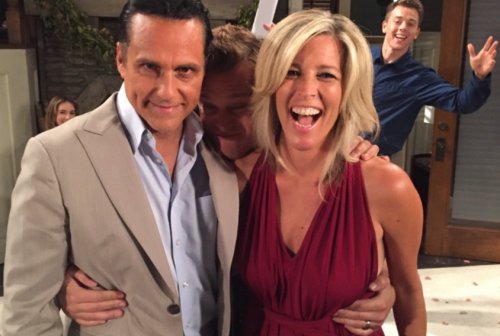 Typically, General Hospital tapes about four to six weeks ahead of time, so this definitely looks like a Fall sweeps wedding based on the timing. Longtime JaSam fans know that the duo first got hitched in September 2011.

So we may see this wedding set in “Port Charles time” to coincide with the anniversary of their first wedding. Whenever it is, JaSam fans will be thrilled to see Jason and Sam getting married, pregnant with baby number two, and enjoying their long awaited and well deserved happily-ever-after.

Other details to be curious about are – who will be Jason’s best man? Sonny seems like a natural choice. As for who will be Sam’s maid of honor, that seems like it might be a dual job for both her younger sisters.

Let’s also hope that Danny and Jake get to play a part in the wedding, perhaps as joint ring-bearers and if we’re really lucky, maybe baby Avery will toddle down the aisle as a tiny adorable flower girl.

We’re also wondering whether Sam rock a traditional gown or something a little more offbeat… What do you think GH fans? Are you thrilled that Frank Valentini leaked the JaSam wedding pic? Are you ready to watch them get hitched at long last?