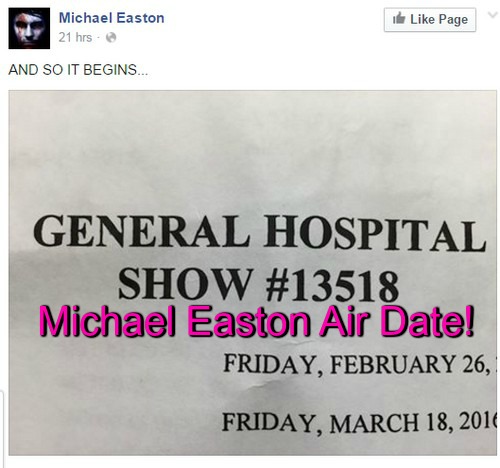 ‘General Hospital’ spoilers tease that Michael Easton will be returning to the ABC soap in March! At the beginning of Fan February, Frank Valentini revealed in an exciting video that he had invited Michael Easton back to Port Charles – and ‘GH’ fans were thrilled.

So far information on Michael’s return has been kept top secret, but the actor took to Facebook to reveal his first air date.

On Friday February 26, Michael shared a photo of the script he is currently filming for ‘General Hospital’ on his Facebook page. Easton captured the photo, “And So It Begins.” Obviously he couldn’t give away any of the top secret details surrounding his new mystery character, so the photo is only of the cover page of the script.

However, it does reveal that Michael began filming on February 26, and his first official ‘General Hospital’ air date will be on Friday March 18.

‘General Hospital’ spoilers and rumors have been running rampant since Frank Valentini announced Easton’s return and it was revealed that he would be playing another new character. TPTB have been very tight-lipped about his mysterious new role.

A working theory on the internet is that Easton may be playing the part of a long-lost member of the Cassadine Family, who is brought to Port Charles to battle with Nikolas (Christopher Tyler) over Helena’s (Constance Towers) estate.

Other ‘General Hospital’ fans think that he may be involved in some sort of mob dealings, possibly a new enemy for Sonny Corinthos (Maurice Benard). Really, we’re just happy Michael is coming back – and we’ll love whatever role he is playing, as long as it is not another vampire.