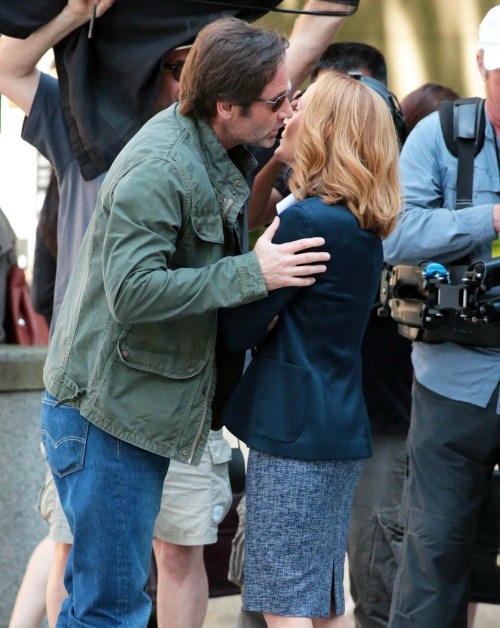 Gillian Anderson hopes that an X-Files renewal will help spark the romance with co-star David Duchovny.  Deadline reports that another instalment of X-Files is coming together for Fox executives and both stars are on board to begin shooting another season of the hit show.  But Gillian Anderson may have ulterior motives to continuing the franchise, as filming would allow her another chance to establish a relationship with her long-rumored love interest, David Duchovny.

The two stars have been dodging rumors of a deep-rooted attraction for years and a new season of the show may be just the nudge that Agents Scully and Mulder need to take their friendship to the next level.

Ever since X-Files first aired in September of 1993, there have been rumors of a romantic relationship between Gillian Anderson (Dana Scully) and David Duchovny (Fox Mulder).  Their on-screen chemistry was undeniable and their close relationship off-screen fueled rumors of a secret romance.

David Duchovny was married to Tea Leoni from 1997—2014, while Gillian Anderson was married to Clyde Klotz from 1994—1997 and Julian Ozanne from 2004—2007.  Now that both stars are unmarried (although Gillian has a long-term partner with whom she has two children) the time may finally be ripe for the two to explore their romantic chemistry off-camera.

With David Duchovny’s infamous sex addiction and Gillian Anderson’s likewise uninhibited sexuality—she has had multiple relationships with other women and has no problem sexing it up for the screen for roles like Stella Gibson in The Fall—the two would undoubtedly have a steamy relationship.

Earlier this year, Gillian Anderson summarized her relationship with David Duchovny in a People interview by saying, “People know we are good friends now and that we’ve found our way into an adult friendship.  But there is something that will always remain between us, a kinetic energy that is tangible when you see us in a room together.”

Fans will have to stay tuned to see if that “kinetic energy” is enough to take these two stars from platonic to celebrity “It Couple” if and when filming begins.

Tell us your thoughts below: do you think Gillian Anderson and David Duchovny will finally hook up?  Or do you think they already have and have kept their romance a secret from the media?  Are you excited for another instalment of X-Files?