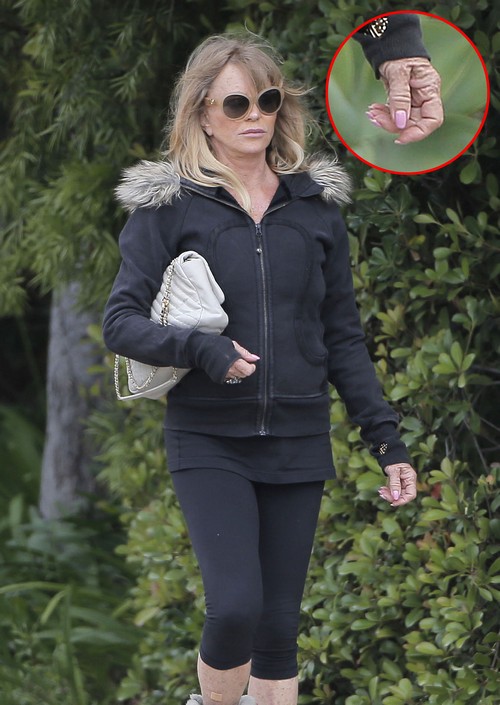 Goldie Hawn’s old looking and withered hands do not lie. Those leathery digits only point out that the actress’s face has apparently received a massive amount of plastic surgery. Everyone raves about how youthful the 70-year-old ‘Private Benjamin’ actress looks.

But those hands! The hands tell a completely different story. Goldie was spotted out shopping and doing some errands in Pacific Palisades on May 5 and an eagle-eyed photographer snapped some photos of those wrinkly old hands.

It’s obvious Goldie Hawn has made more than her fair share of trips to the plastic surgeon over the years in a desperate attempt to remain as young looking as possible. Goldie must love it when people say she looks young enough to be daughter Kate Hudson’s sister, not her mother!

Good genes, healthy eating, exercise, a good beauty regimen, that’s all you need right? No, it’s all helped along by fillers, Botox, face peels, face lifts, eye lifts and neck lifts for ladies of a certain age in Hollywood make us believe the youthful look is natural.

There’s no hiding the aging process when it comes to the hands and Goldie is no different. There are lots of expensive hand creams to help wrinkly, weathered, leathery hands a little bit. A paraffin treatment here and there perhaps helps somewhat.

But as far as we know there isn’t a plastic surgeon in Beverly Hills or anywhere else in the world that has developed a surgery to keep hands looking young and beautiful.

Goldie Hawn may not have admitted it publicly, but the actress has made more than her fair share of visits to a cosmetic surgeon. Would it surprise anyone if she has a standing appointment to get fillers and Botox?

May we suggest a home remedy tip to Goldie Hawn to get those leathery hands looking young again? Have one of your staff whip up a home scrub with equal parts olive oil and sugar.

At night rub that into your hands, slip on a pair of white cotton gloves and voila! In a few weeks those wrinkly withered hands should look a bit more youthful. Perhaps never enough to match the incredible amount of plastic surgery Goldie Hawn has received on her face, but it might help.

Goldie Hawn is spotted out running errands in Pacific Palisades, California on May 5, 2016. Goldie’s extremely wrinkled hands really show off her age of 70. FameFlynet