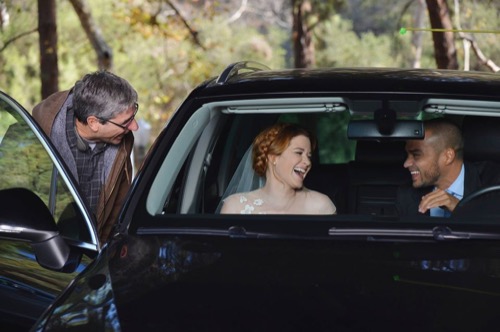 On the last episode, the staff tended to Meredith and her trauma. Meanwhile, Callie and Maggie performed an experimental surgery on Alex’s teenage patient, despite Alex’s objections; Owen continued to clash with Nathan; and things progressed with Maggie and Andrew’s relationship. Did you watch the last episode? If you missed it, we have a full and detailed recap right here for you.

On tonight’s episode as per the ABC synopsis, “Jackson and April’s romance is recalled through flashbacks, starting with their first meeting. Meanwhile, the lengthy progress of one of Jackson’s patients is charted.”

This episode looks like it is going to be a great episode and you won’t want to miss it, so be sure to tune in for our live coverage of ABC’s “Grey’s Anatomy” Season 12 Episode 11 at 9 PM EST!

April and Jackson have been through a lot together. And, unfortunately, their marriage just couldn’t survive all of it. Which is why the two of them eventually found themselves at table about to sign divorce papers on tonight’s episode of “Grey’s Anatomy”.

Samuel had been their son and, in the few moments that he had lived, his parents had loved him but didn’t need how to cope much less grieve following his loss. So they chose to grieve separately. April had realized that she was barely functioning at home and there had been a part of her that had resented the way Jackson was managing to move on.

So April had tried to make the best decision for herself and had gone overseas to Jordan. Where she was constantly on her feet providing medicine to those in need. And didn’t have time to think about all that she had lost.

And what she did over there had made her stronger. However, her leaving had left her husband at a loss. Jackson hadn’t been better than she was at handling the loss of their son, he had just been better at hiding it because he thought April should be able to lean on him.

Yet that changed after she left because then he had no one to grieve alongside him and he had honestly needed her. And had told her that he needed her home with, but she had still gone back over there because she had been too caught up in what she needed. Therefore, she didn’t see when Jackson had to dismantle Samuel’s nursery along or when it was his turn to cry and she hadn’t been around to support him.

All she knows is that she left and her husband didn’t want to be married to her anymore when she had gotten back.

Thus she ended up trying to fight for her marriage when it was already too late. Jackson had had his mind set on divorce and the only reason they hadn’t started divorce proceedings weeks ago was because he hadn’t factored in that they would sleep together again. And that he would realize he was still in love with her in the aftermath.

But, he was so Jackson then gave April hope. He agreed to marriage counseling and they’ve been going for all four weeks when she was served the papers at the hospital.

And there had been no such discussion beforehand. At least not with April, mind you, though Jackson had talked about divorcing his wife with his patient Tatiana. Tatiana had been through a devastating accident and she had needed major facial reconstruction surgery. So Jackson had taken her on as a patient before he had interrupted April’s marriage to someone else and again Tatiana had been a sounding board when he realized marriage counselling wasn’t working.

Yet she’s not the reason why Jackson did what he did. If anything Tatiana had been the one to say he should probably be talking about certain things with his wife. And she also might have mentioned how unfair it was to let April believe that her marriage was salvageable when he wasn’t.

So while April had been upset with the way Jackson had blindsided her, she soon came to the terms with the fact her marriage was over.

And she signed the papers in the end, but then she took a pregnancy test.

Which proved she was pregnant again.