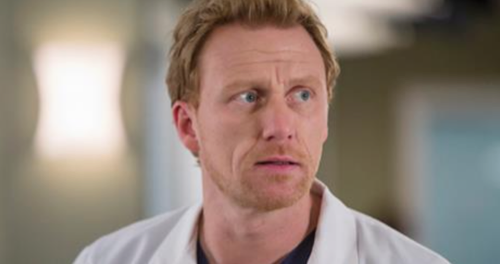 On the last episode, Amelia and Owen got support from Meredith, who wanted them to take a chance on a real romance. Did you watch the last episode? If you missed it, we have a full and detailed recap right here for you.

On tonight’s episode as per the ABC synopsis, “Arizona and Callie clash over Sofia’s future. Meanwhile, Alex and April assist a pregnant teenager who’s back in the hospital; and Stephanie is unsure about where she stands with Kyle.”

This episode looks like it is going to be a great episode and you won’t want to miss it, so be sure to tune in for our live coverage of ABC’s “Grey’s Anatomy” Season 12 Episode 22 at 9 PM EST!

Tonight’s episode of Grey’s Anatomy kicks off with Callie and Arizona with their lawyers – bickering back and forth over custody of Sophia. Arizona is willing to go to trial, she thinks that Webber will take the stand and help her. Arizone’s lawyer strongly advises against her going to trial, but Arizona is convinced that she can win. They are going to court.

At the hospital, there is a pregnant teen named Jenny that fell in the kitchen on top of some soapy dishes – they broke and cut her stomach. The baby’s heart beat is still good – but there seems to be some excess fluid, Russo is going to have to cut her open and check on the baby because Arizone is leaving to go to court.

Arizona and Callie head to court with their lawyers. The judge emphasizes that this is about what is best for Sophie. The judge warns them both that once an agreement is made they can’t go back – Callie and Arizona want to move forward. Owen takes the stand first and testifies on Arizona’s behalf, he says that she has already found a great school for Sophia in New York. Arizona’s roommate is up next, he brags about how much fun Arizona and Sophia have at home. Dr. Blake takes the witness stand too, Arizona shreds her on the stand and points out that she has only known Sophia a few months.

At the hospital Russo has begun surgery on Jenny, the uterus is perforated, and she is getting fluid in her abdomen. She’s only 24 weeks, so if they take the baby out – the odds of the baby surviving are slim. Russo wants to do an experimental surgery and put a plasma patch on her uterus to try to repair it and keep the baby in longer. Alex is not happy with his decision, but Russo tells him to “stand down.”

Court is getting brutal – Bailey takes the witness stand next. Callie’s lawyer uses Bailey to point out that Callie’s schedule is much more reliable than Arizona’s. In the past 6 months, Callie had 27 emergency surgeries and Arizona had 92 unscheduled emergency schedules. Bailey argues that they can’t use Arizona’s career as proof she is a bad parent – because every time she is going to an emergency surgery she is saving a life.

Arizona heads back to the hospital to check on Jenny – she thinks Russo made the right decision with the plasma patch. She tells Alex to go get her the ultrasounds so she can make sure everything is on the up and up before she heads home to put Sophia to bed.

April and Jackson head out to dinner – they are handling their custody issues very differently than Callie and Arizona. They vow not to fight over their kid, and over dinner they divide up all of the holidays and decide that they will alternate Christmas’s every other year.

After a long day at court, Callie heads home to drink away her sorrows. Meredith comes over and they lie in bed together and talk while they drink. Callie confesses that she has been second guessing going to court, she never meant for this whole thing to get so messy and spiral out of control.

The next morning Arizona tries to drop Sophia off at the baby sitter. Sophia doesn’t want to go and shouts that she hates Arizona. At court, Meredith takes the stand to testify. Meredith explains that Ameila is home watching her daughter and Sophia. Arizona’s lawyer points out that is Sophia is packed up and moved to NY then she wouldn’t be able to play with her friends any more and Callie wouldn’t have Meredith as a support system.

Dr. Webber takes the witness stand next, Callie’s lawyer shreds him and has proof of him going out to drink with Arizona over 20 times in the past few months. Apparently the bar where they played trivia kept track of every time they won. She also has proof that all of the times Arizona went out to drink with Webber, she dumped her daughter at babysitters or with Callie even though it wasn’t her night.

After court, Arizona is having a meltdown, she is certain that she just lost. Her lawyer gives her a pep talk before she gets up on the stand. Her lawyer tells Arizona to just “tell the truth” and she will win. Meanwhile, Callie is up on the witness stand – she describes the day that Sophia was born, when she was in a car accident and gets emotional.

At the hospital, there is bad news for Jenny, Russo says that the patch didn’t help and they are going to have to deliver. Jenny cries that it is too early. Alex and Jenny argue with Russo outside, they tell him that it is too early and the odds of the baby living are slim. Alex knows that it is a horrible idea – he calls Arizona’s phone over and over. She finally answers it while she is on the witness stand, which doesn’t go over well with the judge or Callie’s lawyer.

Arizona gets emotional, she says that no matter how this turns out, she knows that Sophia will survive because she and Callie are both great mothers. But, she has to leave court, if she doesn’t go to the hospital now, there is a child that won’t survive.

Arizona arrives at the hospital and Russo is already in surgery – she scrubs in to the surgery room and shouts at Russo to stop what he is doing. He has already started the C-Section, but he hasn’t cut the imbilical cord. Arizona puts the baby back inside Jenny and says that she can patch up the uterus and the baby can stay inside for a few more weeks.

The next day Callie and Arizona head to court – they sit outside together, awkwardly, waiting for the judge. Judge King arrives with a decision. Everyone at the hospital is waiting to hear the verdict.

After court, Arizona picks up Sophia from Meredith’s house. After she leaves, Callie begins sobbing and demands to know “how the hell this happened.” It looks like Arizona won soul custody of Sophia.