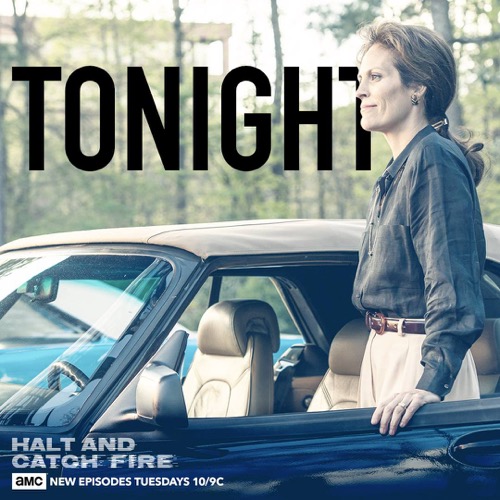 Halt and Catch Fire AMC’s new series airs tonight with an all new Tuesday, August 30, season 3 episode 3 called “Flipping the Switch,” and we have your weekly Halt and Catch Fire recap below. On tonight’s episode, tensions rise at the office, as Gordon (Scoot McNairy) and Donna’s (Kerry Bishe) personal life spills into work.

On the last episode, in the third-season premiere, Donna, and Cameron explored their options to expand beyond chat. Meanwhile, Gordon settled in at Mutiny; and Joe launched his latest product; also while Cameron and Donna struggled to find venture capital, Joe hired a key coder, leaving the rest of the team at a loss. Did you watch the last episode? If you missed it, we’ve got your detailed Halt and Catch Fire recap right here.

On tonight’s episode as per the AMC synopsis, “tensions rise at the office, as Gordon and Donna’s personal life spills into work. Meanwhile, Joe meets with the MacMillan board.”

Gordon’s spark seemed to be gone on tonight’s episode of “Halt and Catch Fire”. Just last week he had been talking about creating again and was actually talking to Ryan about an old project that he had been abandoned earlier, but that he wanted to give new life to. So recently Gordon had every reason to believe that he could be back on top again and that had actually made him excited about his everyday life. However, he had simply given up on all of his plans after Ryan left to go work for Gordon’s worst enemy Joe.

Joe had stolen Gordon’s idea and so it had felt like Joe was also stealing Ryan. But technically Ryan had gone to Joe. Ryan had felt like he was being overlooked at Mutiny and so he had wanted to work for Joe because he thought that Joe would be able to turn him into the next Gordon. So Ryan was happy to go work for Joe and nothing that Cameron or anyone else said was going to convince him to stay on at Mutiny. Not when he now gets to be around glamorous people and even goes to what was basically an orgy at Joe’s house.

Yet Cameron had to try. Cameron had gone to see Ryan at his place and she had tried to tell him that he could be part of something at Mutiny. So Ryan had been a little surprised by that and had told Cameron that he didn’t think anyone would want him back. Cameron though said that they did. Cameron said that she would talk to the other guys if he felt like he had been hassled and she had told Ryan that he was part of the team. And so Cameron had tried everything to win back Ryan and in the end nothing worked.

So Cameron had attended the board meeting with some rather unfortunate news. She had told them that she couldn’t get Ryan back and, after swearing that she had tried to hurt him, the rest of the guys were forced to write off Ryan. Though the board meeting itself was an all-around disaster and that had been because of Gordon. Gordon was in a mood and not that surprisingly he had lashed out at Donna when he felt like he was being made to feel redundant. Gordon had apparently tried to offer up some suggestions in the meeting and for some reason Donna found fault with each one. She later said that she had been trying to navigate him away from a touchy subject like Cameron’s ex, but Gordon had felt differently.

Gordon had taken what Donna said in the meeting which was that he had been busy with other stuff at the time to mean his affair. So he had lashed out at her and created this big scene in the office because he thought that Donna was throwing his one-night-stand back into his face. But even after Donna swore that hadn’t been her intention, Gordon did let her know that he was sick of feeling unforgiven. He said that he had moved because she wanted to move, he had bought and fixed the mainframe because she needed him, and he had even allowed Cameron to stay with them because he had done everything that Donna has asked for to get her to forgive him.

And so Gordon feels like his wife has been holding his affair over his head. Yet, she didn’t think that was what she was doing. Donna thought that she had been including Gordon in her life and that their relationship hadn’t been just work lately. So to find out that he thought differently was a shock for her though she didn’t let their fight stop her from going ahead with the SwapMeet buyout. Donna and Cameron were after all trying to buy out SwapMeet in order to get their hands on the technology they needed to introduce a barter system to the Mutiny program so they needed to have all their ducks in a row.

Like the investors! Donna had met up with Diane and together they had agreed to offer SwapMeet six hundred thousand for their company yet Diane had also expressed at this meeting that she wanted to be there for the actual buyout. Diane had said that was a lot of money for her and her company. So she had wanted to oversee negotiations between John and SwapMeet just to make sure that the money wouldn’t be going to waste. However, Diane eventually saw for herself that John Bosworth could handle himself just fine in negotiations.

John had talked SwapMeet down from overcharging Diane so instead of the six hundred thousand, Diane and her company only had to pay about half that. So Mutiny ended up acquiring just what they needed and at a low rate. But sadly neither Cameron nor Donna were in the mood to celebrate. Donna was quickly realizing how bad off her marriage was when Cameron ran into Joe. Cameron had seen Joe while she was looking to enlist a new coder at the university and at first she thought that he had followed her.

Though Joe replied that he hadn’t. He said that he went to school there and that meeting her had been a coincidence. So Joe had tried to catch up for old times’ sake yet Cameron hadn’t truly been interested. Cameron had still been upset about the thing with Ryan and she didn’t want to be around Joe. Joe however offered to return Ryan if Cameron thought she needed the coder that bad and offering back Ryan hadn’t been such a hardship for him what with the two men constantly fighting back at the office.

And so Cameron could have had Ryan back if she truly wanted it. Yet, she had walked away from that offer and had gone back to Mutiny trying to do everything. Cameron thought she could fill at Ryan’s old position and she had ultimately refused to call her ex Tom because she thought that no one knew the code better than her. So despite taking on new employees thanks to their SwapMeet buyout, Cameron was refusing to see or believe that she could be possible stretching herself thin by trying to do everything.

Meanwhile, Ryan got to see how manipulative Joe was up close yet he still wants to work with the other man and Joe has now taken him on as a new protégé.