Harry Potter and the Cursed Child – Parts I & II by J.K. Rowling and Jack Thorne: Book 8 in Harry Potter Series 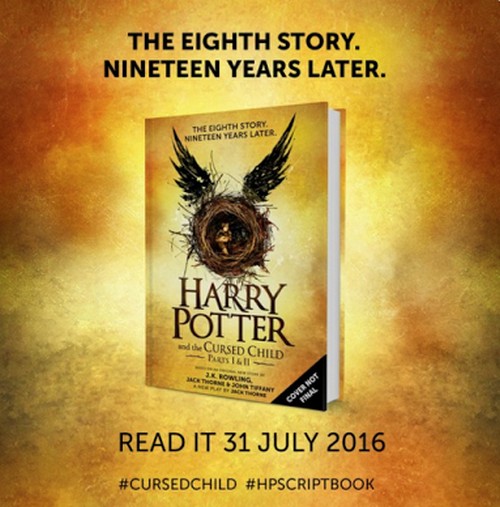 Harry Potter and the Cursed Child Parts I and II by J.K. Rowling and Jack Thorne will be released this summer. This is book 8 in the series so Harry Potter fans, it’s time to rejoice! Your days of withdrawals are coming to an end July 2016.

It’s been almost 9 years since the final Harry Potter book 7, Harry Potter and the Deathly Hollows gave us a bitter sweet end to the seven book series. Now that series is growing to a total of eight books. J.K. Rowling and Jack Thorne wrote scripts for Harry Potter and the Cursed Child Parts I and II which will be released in book format on July 31, 2016.

If you are any kind of a Harry Potter fan, you of course know that July 31 is a very special and important date. July 31 happens to be the author, J.K., Rowling’s birthday as well as Harry Potter’s birthday.

This will be the first official Harry Potter story to ever be presented on stage. The play will be premiered in London’s West End on July 30, 2016, the day before we get our hands on the beloved book. In this book we will be picking up 19 years after the seventh book concluded. We will now be following the characters and their children through the pages of magic.

In October 2015 J.K. Rowling give us a peek into the script on her Pottermore site, “It was always difficult being Harry Potter and it isn’t much easier now that he is an overworked employee of the Ministry of Magic, a husband and father of three school-age children.

While Harry grapples with a past that refuses to stay where it belongs, his youngest son Albus must struggle with the weight of a family legacy he never wanted. As past and present fuse ominously, both father and son learn the uncomfortable truth: sometimes, darkness comes from unexpected places.”

The photo above isn’t even in the final cover art, It’s more of the teaser cover to hold us over until the release of this epic eighth Harry Potter book. How excited are you Harry Potter fans? Are you bursting at the seams counting down the days to the release of Harry Potter and the Cursed Child Parts I and II?

Are you planning any book club type parties to go over every last detail? How many times will you be reading this eighth book? Share all of your excitement and thoughts in the comments below and be sure to check the back here at CDL for all the latest celebrity news!