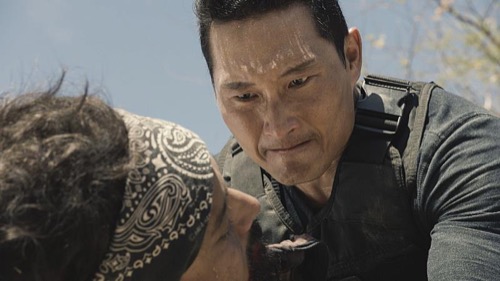 Tonight on CBS Hawaii Five-0 air with an all-new Friday, December 16, 2016, episode and we have your Hawaii Five-0 recap below.  On tonight’s Hawaii Five-0 season 7 episode 11 Fall Finale as per the CBS synopsis, “Five-0 races to Mexico where Chin (George Takei) puts his life on the line to rescue his niece Sara (Londyn Silzer) from kidnappers.”

Chin adores Sara. He sees her as the daughter he had never had with Malia and didn’t even care that her father had been one of his most hated enemies. But unfortunately, Chin had had to let Sara go because her maternal relatives in Mexico wanted her and no court in the states would have sided with him over actual blood relatives if he tried to fight for custody. So Chin had let Sara go without a fight and he had did his best to main his relationship with her by keeping in contact with phone calls and skype. And that had been working out for the both of them however, he was waiting from a phone call from her on his birthday when Sara’s relatives had ended up calling him instead.

Sara had been taken and they didn’t know what to do. They knew they would probably be contacted seeing as the little girl must have been taken for a ransom. However, they didn’t know if Sara would be returned to them safely if they paid. So Chin had gotten his friends together in the states and they had travelled down to Mexico no time flat yet no one on the taskforce was familiar with working such cases in Mexico and so they had to reach out for help. They contacted local law enforcement to see what they could do and they were told by a detective that things would actually work out better if the local police weren’t involved.

He said that the house was most likely being watched and that there could be signs of police involvement. Yet, McGarrett and his guys hadn’t been happy with the laidback approach and they tried finding information about the kidnappers themselves from a reliable source. That reliable source, though, was a crook himself. McGarrett had gone to talk to a drug lord for help identifying the kidnappers and he had been basically told not to do anything stupid. The other man had said that the kidnappers could find always someone else and that there was only one child. And so Five-0 had been advised to pay the ransom rather than risk Sara’s life.

Though the sad truth was that they couldn’t pay the ransom. Sara’s aunt and uncle had been robbed fairly recently by the local police so they didn’t have the money and they had thought that was it. That they were going to lose Sara for good, but Chin had had a plan. Chin had said they would get the money in the same way they lost it – they were going to steal it. So he enlisted his buddies to help him steal the money from the police then he went out and had done something stupid. He had held the police up and they had gotten the money yet he had also let one of the crooked officers see his face because he wanted whatever they had on Sara’s uncle.

Sara’s uncle was a lawyer and his firm usually handled some of the drug dealers. So local law enforcement bugged the lawyers’ phone calls to see if they could find anything that they could use and sometimes the bugged phone calls also leads to police stealing from lawyers that they knew was carrying around their money. But Chin had wanted those tapes because he wanted to see if Sara’s uncle was truly as clean as he let on when he and his wife took custody of Sara and so he hadn’t wanted the information for any other purpose. He just wanted to know what he could use to regain custody of Sara however Kono ended up finding something a lot worse than planned.

Kono had found out that the ransom drop-off was in fact an ambush. The kidnappers had apparently contacted Sara’s aunt Maria not long after they had taken the little girl and they had told Maria that she had to get Five-0 down to Mexico or else they would kill Sara. So not long after Kono called Chin to warn him that Five-0 were attacked and had to kill or be killed, but in the end they wanted to know why the drop-off wasn’t a drop-off. And so Chin had tried to blame Sara’s uncle. He had still suspected that Jorge was involved with drug dealers if not one himself. However, the truth was that Sara hadn’t been a target until Chin made her one because Sara had been kidnapped for what Five-0.

Five-0 had forgotten that they had had dealings with the Diego Cartel not that long ago and so they only remembered it after speaking with Maria. Yet, their detective friend had said that killing Juan Diego had been a big mistake. Juan had been the head of the cartel’s brother and Carlos Diego was considered a Great White shark. He was dangerous and no one messed with him much less kills his brother without repercussions. So taking Sara had been a mean to bringing Five-0 to Mexico and the only reason the little girl hadn’t been automatically killed was because Carlos had wanted to kill the people he blamed for his brother’s death. And so Chin knew he couldn’t let that happen though he hadn’t agreed with how his friends wanted to handle things.

The guys had wanted to rush Carlos’s compound to rescue Sara, but Chin had felt that was too risky and that the only way to get Sara back safely was to hand himself over to the cartel in exchange. So that’s what he did. He offered himself and the cartel decided to let Sara go. Though Chin hadn’t told his friends what he was going to do beforehand and so they had to find his letter to understand. And afterwards it had been too late to rescue Chin from himself.