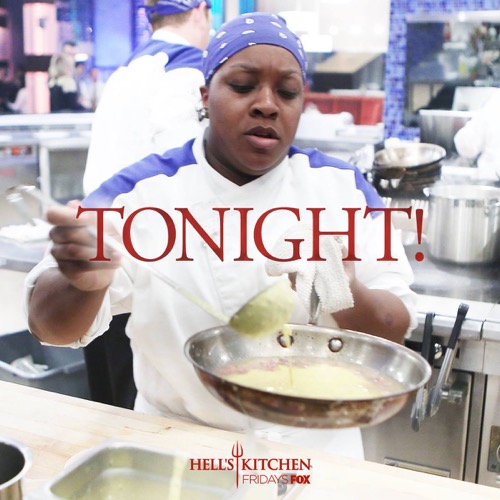 Tonight on NBC their Gordon Ramsay culinary competition series Hell’s Kitchen airs with an all new Friday, December 9, 2016, season 16 episode 9 “Spoon Fed” and we have your Hell’s Kitchen recap below.  On tonight’s Hell’s Kitchen episode, as per the FOX synopsis, “Pureed baby food is tasted by the blindfolded contestants during a challenge that offers the winning team the prize of massages and a nice lunch. Later, dinner service starts off strong with everyone out to impress celebrity diners Josh McDermitt and Jeannie Mai.”

Hell’s Kitchen begins tonight with Paulie telling everyone to stop crying over Johnny being sent home. Johnny was his “boy”, but he was screwing up left and right and needed to go home. In the morning, Chef Gordon Ramsay calls the teams into the dining room, where there is a huge black curtain in the middle of the room.

Chef Ramsay tells them the single best quality any great chef has is their palate. He introduces hell’s Kitchen’s 16th Annual BLIND taste test! Ramsay is making the challenge more difficult because he is taking away the texture, and they have to name the flavor in baby food. They also have to sit in huge baby highchairs attached to spoon catapults.

Each member of both teams will take a turn in the highchair and if chefs, not in the chairs, get 3 strikes their teammate in the chair gets splatted with baby food, if they get 4 wrong, they get splatted twice. Because the blue team has one less teammate, they have to decide who goes up twice, first and last; Wendy offers to do it.

Heidi (red) and Wendy (blue) are tasting the foods and Andrew (red) and Shaina (blue) are up in the chairs. Wendy get all 4 right away. Heidi got 2, so Andrew doesn’t get splattered either. Wendy and Heidi take the chairs while Devin (blue) and Kimberly (red) do the taste testing. Devin only got one right and Wendy got splattered so bad. Kimberly keeps the red team ahead with her palate.

Devin and Kimberly take their places on the chairs while Koop (blue) and Ryan (red) taste the baby food. Ryan gets the first three wrong and Kimberly gets splattered once. Koop and Ryan take the chairs and Paulie (blue) and Matt (red) are up for the food tasting. Its 8 – 10 for the Blue team.

Matt and Paulie head up to the chairs while Heather (red) and Shaina (blue) do the taste testing. Neither Matt more Paulie get splattered and the score is 10-11 for the blue team going into the final round.

Chef Ramsay announces that Wendy has the palate of the day. The reward is the blue team will be getting spa day in a penthouse suite at the Intercontinental. The losing team is stuck with delivery day. Every time they hear the horn, they must run out and get the delivery; in between deliveries they need to make sure both teams are set up for tonight’s dinner service.

The blue team is treated to an orchestra and food at the penthouse suite. They had a beautiful view of Los Angeles, after eating and enjoying the view, they all lay down for their massages. Meanwhile, at Hell’s Kitchen the red team is doing deliveries and Andrew says the loss is on him.

As the red team is done unloading their delivery of ice, they learn from Sous Chef Andi that they only were supposed to get 52 bags of ice; but no one got the invoice and they now have 102. Andi tells them to send the extra back to the truck, everyone is furious.

Andi tells them to hurry up and it is there fault they didn’t check the invoice. Andrew keeps flirting with Heather, which annoys the other team members. The blue team return wearing their nice plush white robes, and the red team says the reason they are better than the blue team is because of their confidence.

Paulie asks Chef Ramsay before dinner service what he thinks Paulie could improve on. Ramsay tells him he doesn’t have that much time and to piss off to the kitchen, and they open in 5 minutes. Koop is complaining about how much Paulie is up Ramsay’s butt. Chef Ramsay asks Marino to open Hell’s Kitchen.

Some of the guests for tonight’s dinner service include Josh McDermitt, who is currently playing Eugene Porter on AMC’s The Walking Dead (TWD) and Jeannie Mai a host of FOX’s Real Talk Chef Ramsay begins calling the appetizers. Devin brings out a perfect risotto for the blue team. Heather and Heidi are equally strong. Ramsay was quite impressed on how the blue team is communicating tonight.

45 minutes and everything is running flawlessly, all of the diners have been served their appetizers. Matt misunderstood and the red team is down a lamb, he cooked 1 instead of 2. Matt says the ticket was called out wrong, and he begins to argue with Chef Ramsay. Matt tells him 8 minutes and begins to walk away, Ramsay tells him this is easy for Matt but not for him because Matt doesn’t care.

Chef Ramsay tells Matt to man up and admit he forgot the order; Matt does. Chef Ramsay then asks Matt if he’s pissed off or if he wants to give him some more attitude. Matt says no, but Ramsay says he is waiting!

Chef Ramsay goes to the blue kitchen where they had a perfect service until now. Paulie brings up raw lamb to the pass and Koop only made half an order of the fish. Koop runs back to cook the fish, and Ramsay tells Paulie to get back and fix the lamb. They quickly recover on their mistakes and entrees are flowing smoothly again.

Matt insists that Chef Ramsay will not break him. The red team is quickly sending out entrees and working well together. Chef returns to the blue kitchen and once again sees Koop making a mistake at the fish station. He asks the blue team if someone could explain to Koop that you don’t cook seabass and salmon – a white fish and oily fish – in the same pan. He explains it’s like cooking lamb and New York strip in the same pan. Chef tells him that he is screwing himself, his team and Ramsay himself.

Koop gets mad when Paulie’s timing is off the rest of the team. Literally everything is at the pass and Paulie again announces he needs 2 minutes. Paulie is right, he asked his team repeatedly for time and now he served Chef Ramsay raw lamb. Paulie keeps saying he asked for two minutes and Chef Ramsay tells him to shut up.

Chef Ramsay calls the entire blue team, saying it is non-stop. First he tells Paulie that lamb was raw and not 2 minutes away from being done. He throws all the food on one plate and gives it to Devin. He orders the entire team to get out of the kitchen. He is very angry by this point.

Chef Ramsay goes after them in the hallway to the dorms, he says half-way through service they all switched off. Paulie says he has been trying all night and he doesn’t want to leave. Ramsay points to the dish with the raw meat and tells him to eat the food and then tell him how good it was. Bon Appetit!!

Chef Ramsay goes back to the red kitchen and they are just pushing each other to finish service. Koop comes into the dorms and starts smashing furniture. Wendy tells him to chill out. Paulie and Koop are arguing and Koop says that Paulie is lucky that was a chair and not Paulie’s face.

Back in the dining room for elimination, Chef Ramsay reminds the red team that even though they finished dinner service, they were far from perfect. He then asks Devin who they nominated. He says Paulie from the start was producing raw food, and the second nominee was Koop because his fish station couldn’t keep up with the kitchen.

Paulie and Koop step forward. Paulie tells Chef Ramsay that he knows he is giving him his best and if he looks into his eyes, Ramsay knows he is giving 100%. Koop says he should stay because he has earned more respect from his team than Paulie has. Koop says with Paulie gone, their team will be faster and more accurate.

Ramsay asks Koop to rate his performance tonight and he says a 6 or a 7. He is asked how he rates Paulie’s performance and he said a 5. Paulie informs Chef Ramsay of Koop’s flip out and breaking the furniture upstairs. Koop admits to it and keeps ranting about why he is so angry.

Chef Ramsay chooses to put Paulie back in line. He tells Koop that he isn’t backing up his talking and he isn’t ready to run a restaurant as head chef. Koop thanks him for the opportunity and leaves. He tells Paulie he is on thin ice and he will be watching him. He tells the blue team to leave and orders the red team to chose one person to move to the blue team to improve them.

“Like many chefs, Koop could talk the talk but after witnessing his cooking, I told him to walk the walk!”
~ Chef Gordon Ramsay