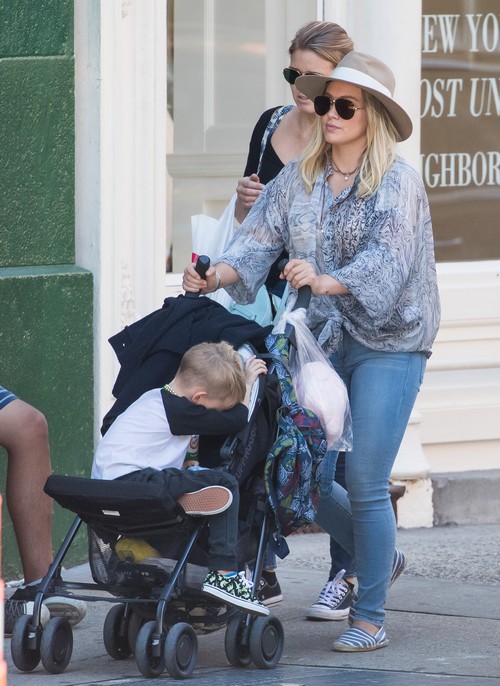 Hilary Duff was spotted running errands with her son Luca Comrie while the two were out and about in New York City this weekend. The actress was dressed in an oversized sweater, hats and jeans, with both fans and critics alike wondering if she is struggling with both a career crisis, weight gain and ultimately, her body image.

Hilary’s figure has always made headlines throughout her career. Even though the former Disney star is often photographed by the paparazzi at her local gym in Los Angeles several times a week, the actress and singer’s appearance has changed drastically over the course of the last several months.

Of course, there’s also the speculation that the single mother might be having body confidence issues because she’s struggling with her career. Even though Hilary is currently reprising her role as Kelsey Peters in season 3 of TV Land’s hit sitcom ‘Younger’ she has nothing else on her plate as far as her movie and album plans are concerned.

Of course, Hilary Duff certainly isn’t as popular as other chart toppers in the industry like Taylor Swift or former Disney star Selena Gomez. And if it weren’t for her post-Disney fan base, she certainly wouldn’t have a career in acting either. That right there might be a reason why Hilary Duff has given up on her hopes of being an A-list star and worse, her health and weight, too.

What’s more, there’s a good chance that Hilary knows that she can’t compete with ultra-thin actresses that have dominated both the small and big screen in Hollywood. Even though the industry has long advocated for women like Hilary Duff to accept themselves and their bodies the way they are, that’s clearly not the case for her anymore.

Hilary’s changing appearance might be the reason why Hollywood hasn’t made her a big-named star. Sure, she might have the potential, but as far as movie execs are concerned, she doesn’t have the right figure or appeal that they look for. And that’s why so many actresses that are Hilary’s age end up risking their health with extreme dieting and rigorous workout routines to stay thin.

Take a look at our photo gallery of Hilary Duff below and tell us, do you think the singer and actress is dealing with a career crisis? Is she losing out on potential movie roles because of Hollywood’s demand for ‘skinny’ actresses? Tell us what you think and of course check back with CDL for all the latest updates and news on all of your favorite celebrities right here.

Hilary Duff is strolling with her son Luca Comrie in Soho, New York on September 15, 2016. She pushed her son in a stroller while she went shopping by FameFlynet