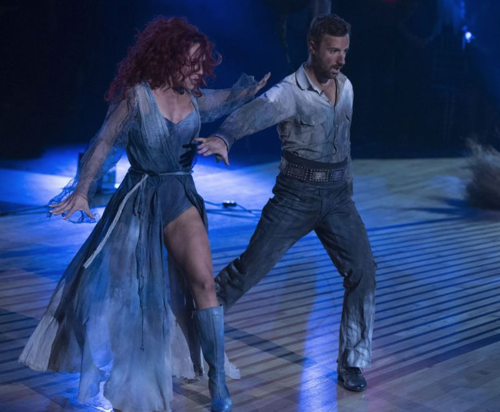 Tonight on ABC the glitz and the glamor returns to the ballroom as Dancing With The Stars returns for the ninth episode of the 23rd season. Canadian race car driver James Hinchcliffe & his professional dancer Sharna Burgess took the stage tonight and danced the Jazz for their Showstopper night dance to “A Brand New Day” from “The Wiz”.

The six remaining celebrities will dance two show-stopping dances – one from some of the hottest Broadway musicals, and a second where they are paired up for a “Team-Up Challenge”. At the end of the night, one couple will be eliminated.

Bruno: A great wizard and a wonderful dancer! I have to point out your versatility and skill. You inhabit every style and every role with such a natural flow, it’s incredible. That was fantastic! You went off in the beginning and you missed a step, but a tiny flaw in an otherwise perfect dance.

Carrie Ann: First of all I have to say, not everyone can rock a green outfit. You are rocking it. Bruno is right, you got a head with one movement, but you came back with a vengeance and you were like “I am going to get this move and that move, and that move!”

Idina: I played the wicked witch of the west and green is hard to look good in, and you look hot. I would share the stage with you anytime, you are amazing!

Julianne: We all know you messed up but whatever, I called it in like Week 3, you should be on Broadway! That is all I am going to say!