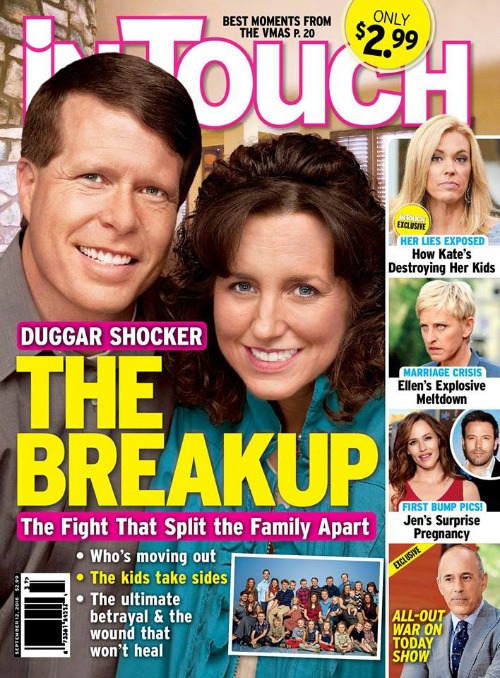 Jim Bob and Michelle Duggar are divorcing, Kate Gosselin is ruining her children according to ex Jon Gosselin and Ellen DeGeneres’ marriage to Portia de Rossi is in crisis. Even more amazing is that Jennifer Garner and Ben Affleck are expecting another child and Matt Lauer is involved in an “all-out war” on the Today Show – all this on the In Touch cover for the week of September 12.

According to the cover of the latest issue of In Touch, Jim Bob Duggar and Michelle Duggar are divorcing. The couple has been battling over their son Josh Duggar who is accused of being a child molester. Reports indicate that Jim Bob Duggar is ready to accept his son back into the family fold after Bible-based therapy but, like any reasonable mother, Michelle Duggar no longer wants anything to do with the alleged pedophile.

The feud over their sexual predator son has led to the couple splitting and a significant divide in their 19 children as the kids take sides in the family drama.

Kate Gosselin is facing allegations that she is ruining her children, the magazine reports. After Kate Gosselin’s recent interview in which she threw shade at her former husband Jon Gosselin and implied that he was an absentee father (a sentiment soon echoed by two of her daughters,) Jon Gosselin is firing back, saying that Kate’s interview is filled with lies.

Sources claim that Kate only stayed in the marriage at the time for fame and fortune and is now manipulating her children to echo her allegations against their father. The two have been accusing the other of being bad parents since their split and Kate’s recent interview seems to have reignited their bitter feud.

Ellen DeGeneres’ marriage to Portia de Rossi is in crisis. The magazine claims that the talk show host had a meltdown and that her longtime marriage to Portia de Rossi is headed for splitsville. Rumors have circulated the pair for some time now that Ellen DeGeneres is controlling and flirtatious with other women, while Portia has allegedly began dating men again. The potential $330 million divorce seems to be too much for Ellen, who recently had a massive meltdown.

Estranged couple Jennifer Garner and Ben Affleck are rumored to be pregnant with their fourth child. The two are supposed to be headed for divorce but sources tell the magazine that they are now expecting another child. Ben Affleck is rumored to have been attempting to mend fences with Jennifer Garner ever since the two separated and, in light of the pregnancy, it appears that the couple is now reconciling.

Which of these headlines do you think is juiciest? Let us know in the comments below!