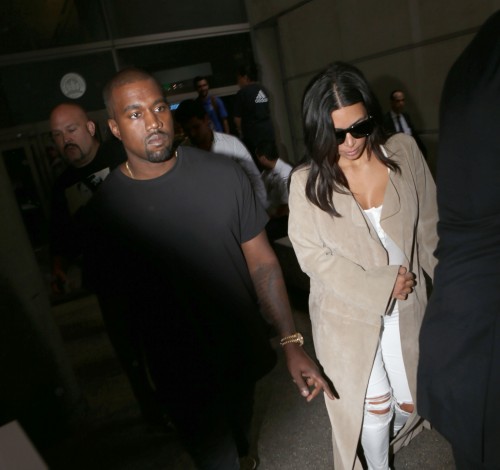 Kanye West debuted the music video for ‘Famous’ on June 24, 2016. Kanye’s controversial new song claims that he made Taylor Swift, his archrival, famous and likely reignited their long-standing feud.

Over eight-thousand people, including Kanye’s wife, Kim Kardashian West, attended the watch party at L.A.’s Forum that was live-streamed on Title concurrently. Kanye West spoke to the crowd at the viewing: “I want to thank all y’all, my wife, and y’all supporting ideas and truth.”

What makes the video so controversial isn’t so much the nudity, but the doppelgangers of specific celebrities joining Kanye West and Kim Kardashian West in bed many of whom have a personal past with either Kim or Kanye, and will be forever linked to the rapper and reality star including Taylor Swift.

T-Swift alone will raise more than a few eyebrows. After all, it was the feud over this song that re-heated their rivalry. To recap, Taylor Swift and Kanye West spoke by phone earlier this year. Kanye claimed he asked Taylor’s permission to refer to her as “the b***ch” in Famous.

Kanye claims Taylor was fine with it. However, Taylor Swift said she never gave Kanye permission to use her name in that context. Kanye’s wife, Kim Kardashian West got involved and began her own feud with Taylor, siding with her husband.

To sum things up, the three haven’t spoken since then – their only communication being contact from Taylor’s attorneys. Taylor Swift isn’t the only disgruntled celeb to make an appearance. Showing up in the video is a lookalike of Kanye’s ex-lover, Amber Rose.

The two have been battling back and forth on social media. One of Kim’s former lovers, Ray J is also seen via double in the video. Ray J and Kim made a sex tape, which helped propel Kim Kardashian to stardom.

In the video from Kanye’s ‘Life of Pablo’ album, Ray J’s body double is lying on the opposite side of Kim with his arm around her. Doppelgangers of former lovers, Rihanna and Chris Brown are shown lying beside each other in the large bed.

Their relationship ended rather violently and publically after Chris was charged with domestic violence. Five others who occupy space in the apparent post-orgy scenario are stand-ins for Donald Trump, former President George W. Bush, and Bill Cosby.

Business associate and longtime Vogue editor, Anna Wintour, also is doubled in the video, and Jenner family member, Caitlyn Jenner appears as a double as well. Where Anna Wintour is concerned, she and Kim have a love-hate relationship.

It’s been bandied about that Wintour banned Kim Kardashian from the Met Gala because she broke the editor’s rule of no taking pictures. It’s clear that the bulk of the celebrities in the video are body doubles.

George W. Bush’s rep quipped they should have chosen a more muscular stand-in for the former president saying that W “is in much better shape” than the guy who played him. Surely more reaction will roll out soon from other celebs spoofed in the video.

During an interlude in the video, credits thanked all the celebrities involved including “special thanks” to every celebrity involved for being famous. So, CDL readers, have you seen Kanye’s new video? What do you think about it?

Why did he put such an odd mishmash of different celebs in bed with him? Tell us what you think in the comments. And be sure to stay tuned to CDL for all the celebrity news and gossip you need.