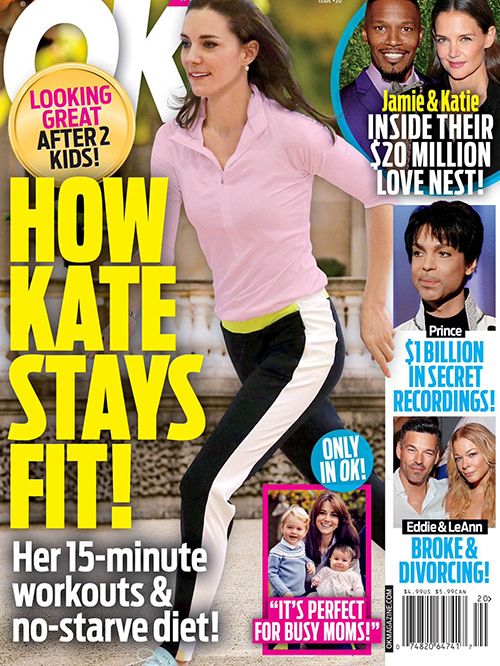 Kate Middleton’s obsession with diet and exercise has Prince William concerned the Duchess of Cambridge is much, much too vain. It’s all about appearances for Kate, who thinks she’s some kind of movie star and supermodel. Queen Elizabeth and Camilla Parker-Bowles are disgusted with this superficial cover girl and her commoner standards.

Rather take on serious charity work as Princess Diana did, Kate Middleton’s days are filled with extreme dieting and exercising between trips to the plastic surgeon for a nip here and a tuck there.

This future Queen is ridiculously self-absorbed and has no idea how to exemplify the Royal values of duty to crown and country, hard work and self-sacrifice. Insiders try to pass of the superficial values by saying Kate just wants to be healthy and make certain Prince William, Prince George, and Princess Charlotte are too.

The source wants people to believe that Kate doesn’t starve herself. In fact, the Duchess of Cambridge enjoys cooking lean proteins as well as lots of fruits and vegetables for the family’s meals, the source recently told OK! magazine.

But deep down William knows he is now stuck with a wife who has horrible low class Hollywood values. The second-in-line to the throne probably wishes he had married an aristocrat who understands the duties of a Royal wife.

If only William could have won the heart of Isabella Calthorpe! Both her maternal and paternal grandfather’s held aristocratic titles. But Isabella wanted nothing to do with Royal life or Prince William. Rather than seek out an appropriate bride when Isabella spurned his romantic advances, Prince William went running back to Kate with his tail between his legs.

Maybe someone can get through to Kate Middleton and explain, once again, the duties of a Royal wife. Kate needs to take on meaningful charitable work and realize her days as a Vogue cover girl are over.