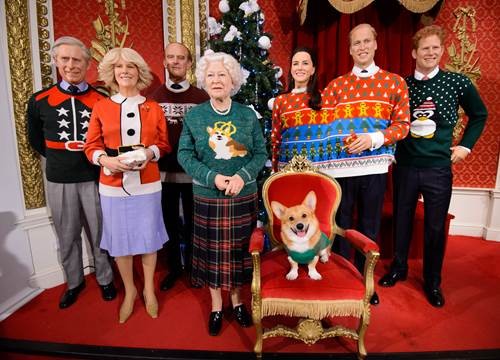 Kate Middleton has been dressed up in silly clothes for the wax museum’s Save the Children charity event All are invited to join in the fun and dress up in “there daftest knit on Friday 16th December for Christmas Jumper Day.” It’s beginning to look a lot like a Royal Christmas at Madame Tussauds London.

Those who visit the exhibit at the famous wax museum will find the Duke and Duchess of Cambridge dressed in a “cozy double jumper” decorated with Christmas and gingerbread men. The dark green sweater chosen for Prince Harry sports snowflakes and a penguin wearing a red winter hat. Perhaps Harry will be dressed in a double jumper with Meghan Markle for Christmas 2017.

It’s not just Kate Middleton, Prince William and Prince Harry who have been dressed in funny Christmas knitwear. Queen Elizabeth, front and center, wearing peals and a plaid skirt, has been dressed in a sparkly green sweater adorned with a corgi wearing a crown. 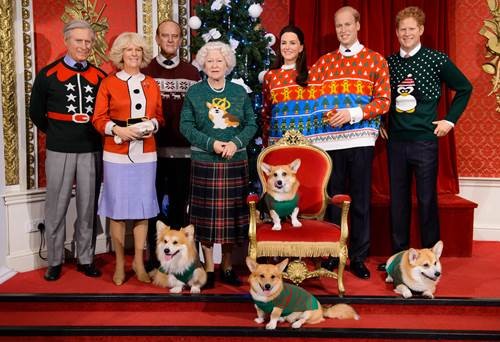 Prince Philip stands two steps behind Queen Elizabeth dressed in a dark sweater with decorated in white snowflakes. The Duke of Edinburgh, Prince William and Prince Harry are all wearing dress shirts and ties underneath their sweaters.

Standing to the left and slightly behind Queen Elizabeth’s wax form is Camilla Parker-Bowles who was given the honor of wearing a Father Christmas-inspired jumper. Prince Charles stands next to Camilla wearing an elf-like military style sweater.

According to the Madame Tussauds public relations department, the Royal family are very pleased to be involved with the ‘Save the Children Christmas Jumper Day. The Press Association shared a video clip explaining the campaign which the wax museum supported in 2015 as well. 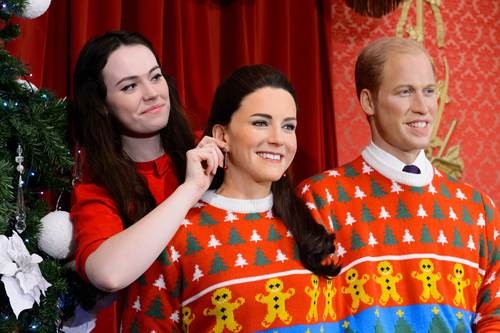 Helena Wiltshire, head of Public Relations for Save the Children explained, “As you know we’ve seen some terrible crises this year, particularly the child refugee crisis. The money goes to help the children, like those get an education, get access shelter, psychosocial support and plenty of others here in the UK as well.”

Save the Children and Madame Tusssauds encourage people from all over the United Kingdom to come dressed in their silliest of silly Christmas knitwear and pay £2 to join in the fun Friday, December 16.

Visitors will not only find the Duke and Duchess of Cambridge, Queen Elizabeth, Prince Philip, Prince Charles, Camilla Parker-Bowles and Prince Harry as part of the silly sweater display, but Father Christmas and real live corgis have joined the festivities. 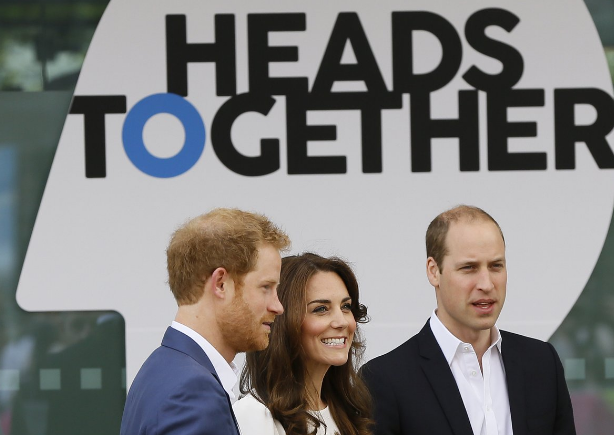 The wax figures of the Kate Middleton, Prince William, Prince Harry, Queen Elizabeth, Prince Philip, Camilla Parker-Bowles and Prince Charles can be seen at the museum throughout December. Visitors are encouraged to come see the display and get a selfie with the Royal Family wax figures. Come to CDL for all your hot Royal news and reports!

We’ve teamed up with @savechildrenuk to dress up our figures of The Royal Family for #ChristmasJumperDay! See more: https://t.co/FSIuhWE569 pic.twitter.com/WvT3lToHnH