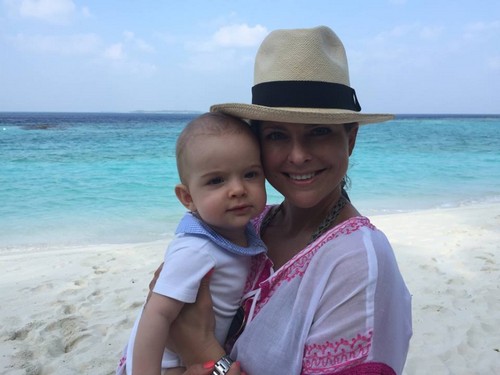 Is a furious Kate Middleton demanding a Royal holiday with Prince George and Princess Charlotte? Is Princess Madeleine of Sweden to blame for the latest alleged temper tantrum from the Duchess of Cambridge? What possibly could have sparked this display of envy from what some people say is an entitled Princess Kate?

An adorable Princess Lenore of Sweden is enjoying an ice cream cone in one photograph. In another the little princess is captured as she is walking down the beach. Prince Nicolas is obviously enjoying the holiday in paradise! In one of the photos shared by Princess Madeleine Nicolas is smiling, just on the verge of giggling and wiggling.

Isn’t it just these types of candid portraits Kate Middleton has been dying to share? The first official pictures of the happy Cambridge family after Prince George’s birth were snapped by Michael Middleton. This is the only non-professional of the entire Cambridge clan that has been released to the public.

The Duke and Duchess of Cambridge’s Christmas photo may have been relaxed, but it was taken by a professional photographer.

There have been a few “personal photos” of Princess Charlotte and Prince George that Kensington Palace has posted via social media. The Duchess captured an adorable six-month-old Princess Charlotte in photos and released them via social media. The latest informal snapshots shared by Duchess Kate were to photos of Prince George off to his first day of nursery school at Westacre in early January.

But there aren’t any casual Cambridge family photos similar to the ones posted by Princess Madeleine on Facebook. Did these snapshots begin a battle to show which Royal Family is the most relaxed and in touch with the common people?

Would Queen Elizabeth consider sanctioning a tropical vacation for Prince William, Duchess Kate, Prince George and Princess Charlotte? Even if Queen Elizabeth were to do so would Her Majesty allow the Duchess of Cambridge to willy-nilly share photos on Twitter or Facebook without permission?

Kate Middleton may want to take note. Princess Madeline captioned the Facebook share, “Family time, sadly interrupted. What a pity we weren’t just asked for photos, because here are some sweet ones.” Apparently people won’t leave the Swedish Royals alone when vacationing. Can you imagine if the Cambridge’s were to take a similar holiday?